Denver is on the move! 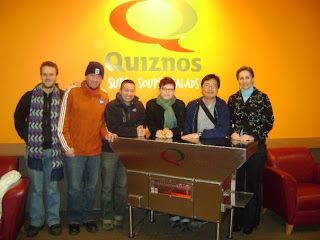 It’s been a while since we’ve provided an update. But that’s not because nothing has been happening in Denver. On the contrary, we’ve been too busy to have time to update everyone.

On Friday November 20th, the Student Advisory Committee to the Auraria Board (SACAB; a student government body comprised of representatives from the three different universities housed on the Auraria Campus) passed a resolution urging the campus food service provider Sodexo to work with the Coalition of Immokalee Workers. The resolution reads in part:

“AHEC [Auraria Higher Education Center] has an ongoing contractual relationship for the provision of catering and dining services with the food service corporation Sodexo; and . . . we, SACAB Representatives, through our student fees, and the use of catering services fund this food service contract between AHEC and the Sodexo corporation . . . THEREFORE, BE IT RESOLVED that SACAB urges the Sodexo corporation to meet with the CIW to negotiate the terms for directly improving Florida tomato pickers' wages by $.01 per pound of tomatoes, and, together with the CIW, implement an enforceable, human rights-based Code of Conduct for its tomato supply chain.”

The other student government bodies at Auraria are moving forward with passing resolutions of their own.

The same day as SACAB passed it’s resolution, students from throughout the Front Range gathered on the Auraria Campus to discuss participating in the Dine With Dignity campaign on the own campuses and coordinating their efforts with students throughout Denver and around the state. Sodexo is not only the food service provider on Auraria Campus but also on all the other campuses in Denver and many campuses throughout Colorado. And students from those many campuses are preparing to take action to hold Sodexo accountable for the human rights abuses occurring in it’s tomato supply chain.

Meanwhile, a delegation of Denver Fair Foodistas paid a visit to a certain Denver-based “fast casual” restaurant chain. No, not THAT restaurant chain. This time it was a visit to the corporate offices of sub-sandwich giant Quiznos. Unlike our other experiences with Denver’s other fast casual food corporations, Quiznos actually listened to us in a respectful manner and even expressed support for the principles of Fair Food. Of course, more than just words are needed; action is needed, and we will be watching Quiznos closely to ensure that it joins the growing mass of corporate food purchasers cooperating with the CIW to create a more just food system.

(We hope that Chipotle doesn’t like think that we’ve forgotten about it just because we’re paying attention to Quiznos. No need to feel left out, Chipotle, we've still got an eye for you!)

During this same busy week, Denver consumers also participated in the National Supermarket Week of Action by delivering letters to the mangers of King Sooper supermarkets demanding that Kroger (King Sooper’s parent company and the largest supermarket chain in the country) join in agreement with the CIW.

Throughout the country, the Campaign for Fair Food is pressing forward at rapid speed. Pickets, rallies, marches, letter drops, street theater and more have been breaking out from California to Florida. Just next week the CIW is holding a major march on headquarters of the Florida-based supermarket Publix while student and grassroot allies are planning a demonstration outside the corporate offices of food service provider Aramark in Philadelphia as part of the Fair Food Solidarity Tour led by United Workers.

Everyone in Denver has a lot to be proud of as part of this incredible movement.
Posted by DFF at 9:31 AM