As participants in the Fast for Fair Food were making their way back home, an event was taking place in Santa Barbara, California, that would once again highlight the contradiction between the carefully crafted public image and the on-the-ground practice of one longtime Fair Food hold-out: Chipotle Mexican Grill.

The event was the Edible Institute 2012, "a two-day gathering with some of the local food movements most influential thinkers, writers and producers," and it included speakers such as Barry Estabrook (author of "Tomatoland"), Tracy McMillan (author of "The American Way of Eating"), Helene Yorke (an executive at Fair Food partner Bon Appetit Management Company), and none other than Chipotle's very own Communications Director, Chris Arnold.

The Twitter record helps establish the events of the day:

Doing the public speaking thing this morning on a panel @edi2012.

Arnold gave an informative overview of Chipotle's committment to sustainably produced meat. But, from there, the "public speaking thing" didn't quite go as planned...

Seems that some of those present had other issues on their mind such as Daniel Klein from the Perrenial Plate:

The brave someone who did ask about the Colition of Immokalee Workers was none other that a journalist who's followed the CIW closely:

And there it is... @Barry_Estabrook just tackled elephant in room. Brought up question of why @ChipotleMedia hasn't signed w/ @ciw #edi2012

The room burst into applause. Arnold offered a non-answer, but most of the audience wasn't buying it, including Mirra Fine and Daniel Klein of The Perennial Plate:

Turns out @ChipotleTweets and @chiptolemedia are really really nice... doesn't mean they shouldn't sign with @ciw to ensure worker's rights

It's nice to see that Food Movement movers and shakers won't let Chipotle off the hook when in comes to respecting the dignity and human rights of farmworkers.
Posted by DFF at 2:12 PM No comments:

The Fast for Fair Food has begun! 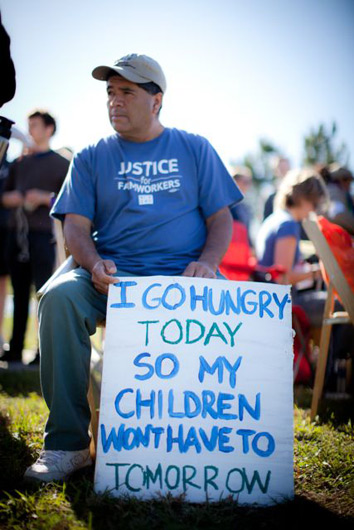 Farmworkers from the Coalition of Immokalee Workers and allies from throughout Florida and across the country have begun there six-day Fast for Fair Food outside the headquarters of the Publix supermarket chain in Lakeland, FL. Actually, today is already the 3rd day of the fast.

Publix is maintaining its indifference toward farmworkers, their rights, and their request for dialoge. Publix cold-hearted response (best illustrated by the statement of one spokesperson: "If there are some atrocities going on, it's not our business") deserves a more thorough dissection - both for being disengenuous and factually lax as well as for it being morally indefensible. But that will have to wait for another time.

For now farmworkers putting there physical health on the line in the pursuit of respect and recognition and the day when their exploitation is truly a thing of the past.

One Denver Fair Foodista will be joining folks in Florida this weekend for the breaking of the fast. Check back for updates.