Join us for a movie screening and discussion on the Campaign for Fair Food as part of the Student Labor Week of Action: 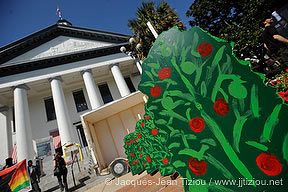 In the wake of the CIW's powerful action in the capitol city of Florida, Governor Charlie Crist finally met with the CIW and then issued a statement placing his support behind the Coalition of Immokalee Workers and the Campaign for Fair Food. This represents the first time a Florida governor has met with a farmworker organization as well as the first time a Florida governor has publicly spoken out against modern-day slavery and sweatshop conditions in the state's agricultural industry. See the CIW website for all the news - http://www.ciw-online.org/.

Meanwhile, the Campaign for Fair Food surges forward as the Student/Farmworker Alliance announces a major new campaign targeting food service providers whose lucrative contracts with college campuses will be facing some stiff student opposition if they don't begin working with the Coaltion of Immokalee Workers to ensure fair wages and human rights for farmworkers. Those companies doing business on Denver's campuses, such as Sodexo, might want to take heed. See the SFA website for more details: http://www.sfalliance.org/.
Posted by DFF at 1:16 PM No comments:

Hello Denver Fair Food supporters,
it's been a while since we sent an update about what happening in Denver around the Campaig for Fair Food.

1. Check out the new Denver Fair Food blog for the latest events, news and analysis coming from the Denver front of the Campaign for Fair Food! Go to denverfairfood.blogspot.com. Contact DenverFairFood@gmail.com if you you're interested in contributing.

2. Today, the Coalition of Immokalee Workers staged a creative protest designed to bring the reality of brutal human rights violations in Florida's fields to the governor's doorstep in Tallahasse. The rally occurred after weeks of collecting petitions demanding that the governor take a stand against modern-day slavery. It also occurred in the wake of a flurry of activity including news articles including a feature in Gourmet Magazine (and several follow up pieces), editorials, blog posts and a delegation to Immokalee of leading food justice and sustainable agriculture activists. You can find more information about all this exciting activity and links to all the articles at the CIW's website www.ciw-online.org.

3. Colorado Jobs With Justice will hold an event on Workers' Response to the Economic Crisis:
Please join us on Wednesday, March 11, from 6:30-8:00 pm at Our Savior's Lutheran Church (915 E. 9th Ave., Denver, CO 80218) for a discussion about the economic crisis and solutions for working people. This event will include testimony from workers and a panel that includes:
Kim Bobo - Founder and Executive Director of Interfaith Worker Justice and author of Wage Theft in America: Why Millions of Americans Are Not Getting Paid - And What We Can Do About It
Polly Baca - Director of Consumer Affairs under President Bill Clinton and former Colorado State Senator.
Rich Jones - Director of Policy and Research at the Bell Policy Center.
Dr. Dana Wilbanks - Professor Emeritus of Christian Ethics at the Iliff School of Theology.

4. Melody Gonzalez from the Fair Food Across Borders campaign will be presenting in Denver and Boulder:

Ever wonder where your food comes from? Who picked the fruits and vegetables for your dinner plate? How they were treated?

Melody Gonzalez, national campaign coordinator for the Fair Food Across Borders (FFAB) Campaign, will help us understand the social and environmental costs behind our food, and its relation to migration, free trade and industrial agriculture in Mexico. FFAB's goal is to make visible the human rights abuses suffered by migrant agricultural workers in Mexican agribusiness camps. We will expose the serious human rights conditions of agribusiness practices in Mexico regarding health, education, housing, pesticide use, child labor and labor rights.

There are estimated to be over one million migrant agricultural workers in Mexico. The majority of these migrant workers come from the Southern Mexican states of Oaxaca and Guerrero. These families are forced to leave their communities because they have no other way to support their families. These families leave their communities from four to six months a year to work in the agribusiness camps. There are hundreds of trans-national agribusiness camps in Northern Mexico, in states like Sinaloa, Sonora, and Baja California. These camps grow a large variety of produce from tomatoes to watermelon. The vast majority of the fruits and vegetables harvested in these camps are for export to the US and Canada. For example in the winter months, if you live in the US, there is a good chance the tomatoes you buy from the supermarket are from a Sinaloa agribusiness camp.

Presenter Melody Gonzalez, originally from Santa Ana, California, is the daughter of Mexican immigrants from San Gregorio, Michoacan. Her father was a farmworker in Sinaloa, Mexico and in the United States. Before her position with FFAB, she was one of the National Coordinators for the Student/Farmworker Alliance and for Interfaith Action of Southwest Florida in Immokalee, FL where she worked in partnership with the farmworker organization the Coalition of Immokalee Workers (CIW). For 3 years, Melody served as a bridge between the multiple student, faith, labor, and community-based allies of the CIW; raising consciousness about the exploitation and human rights abuses faced by farmworkers in Florida and moving consumers to take action in successful campaigns against fast food companies. Melody was an active participant in the CIW's women's group in Immokalee and served as an interpreter, doing simultaneous translation for CIW members at presentations and rallies and facilitating the process of farmworker negotiations with executives of fast food corporations.
Posted by DFF at 4:23 PM No comments:

Slavery, Silence and the Food We Eat

The Coalition of Immokalee Workers (CIW), a community-based human rights organization of Haitian, Mayan and Latino immigrant farmworkers in Southwest Florida, is asking people from around the country to “tell Florida Governor Charlie Crist to take a stand against slavery.”

Slavery? Yes, slavery. They are not speaking euphemistically; they are talking about situations meeting strict federal legal standards for what constitutes the criminal act of enslaving another human being. Since 1997, there have been seven successfully prosecuted cases of slavery – involving more than 1,000 farmworkers – in Florida’s agricultural industry. One federal prosecutor called Florida “ground-zero for modern slavery.”

As the CIW points out (see the 1/26/09 post), during the same time period Florida has had three governors and not once have any of them spoken out against what can only be called a human rights crisis in Florida’s fields. Every case of slavery that is prosecuted represents many more that are being investigated. And every case that is investigated represents many more that have not yet come to light or may never. Most importantly, every case of slavery grows out of the fertile ground of sweatshop conditions in which farmworkers toil everyday for sub-poverty wages without basic labor rights or benefits of any kind. Despite all this, the only comments to come out of the Florida state government have tried to minimize the significance and scale of the crisis.

Some may be thinking now, “well that’s all terrible, but it’s happening in Florida. Let them take care of their own problems. What’s that have to do with me?” According to the Florida Tomato Committee, Florida tomatoes account for 95% of all U.S. grown tomatoes eaten by Americans October to June. And 45% of all tomatoes consumed in the U.S. year-round are Florida tomatoes. Tomatoes are one of those crops where slavery has been prevalent. Supermarket chains and gigantic fast food corporations are major purchasers of tomatoes from Florida which means that it’s possible that the tomato for your salad tonight or on your hamburger for lunch may have been picked by slave labor.Some of these major tomato purchasers are companies based right here in Denver like Chipotle Mexican Grill. (After years of campaigning against it, Chipotle finally acknowledged the exploitation facing farmworkers who harvest its tomatoes. However it has still not taken the necessary steps to address the problem in a way that is accountable to workers and ensures they have a voice in the protection of their own rights.) The point is that even Colorado has received a little bit of the benefits of slave labor and therefore shares a little bit of the responsibility for ending it.

On another level, it undermines immigrant rights everywhere to allow the exploitation and even enslavement of immigrant workers in Florida to be so blatantly ignored. The subtle or not so subtle message Gov. Crist is sending is that there is no cause for alarm and outrage because those impacted are nobodies and deserve no regard, no respect, no rights. The more acceptable this logic becomes, the longer it goes unchallenged, the harder it will be for all immigrants to invoke their rights and dignity.And citizens face the repercussions as well. In fact, the victims in several of the Florida agricultural slavery cases were indeed US citizens. Indeed, the same system that is exploiting the labor of farmworkers is disenfranchising immigrants, is eroding the rights of workers everywhere and is depriving people of resources around the globe. We cannot let them set new lows in standards of others rights without risking the deterioration of our own. In one of the CIW’s early actions, hundreds of farmworkers marched on the house of a crewleader who had brutally beaten of one his workers, unified by the slogan “Golpear a uno es golpear a todos.” To beat one of us is to beat all of us. This is not rhetorical but quite literal: if one person’s rights can be violated than anybody’s can.

Take a minute to send an email to Gov. Crist:http://www.unionvoice.org/campaign/Governor_Crist_stand_against_slavery
Posted by DFF at 2:27 PM 1 comment: