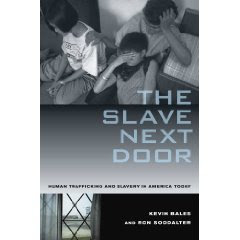 There is a great new book out examining the CIW's anti-slavery work: The Slave Next Door: Human Traficking and Slavery in America Today by Kevin Bales and Ron Soodalter.

There is a sizeable excerpt from the book online too!
Posted by patrick at 9:41 PM No comments:

from the Prax(us) art show

Prax(us) is an organization which addresses human trafficking in the state of Colorado. One of the things that makes them an incredible organization, especially in the anti-human trafficking world, is their commitment to an anti-oppression model of community work. Like the Coalition of Immokalee Workers, Prax(us) believes that the communities most effected by modern-day slavery need to be the ones who lead the struggle against it, and that human trafficking and slavery need to be combatted on an institutional level, not just on an individual case by case basis. Given the similarities in philosophy and overlapping issues, Prax(us) is an ally that we've been proud to have at the Denver Fair Food Committee in our work in solidarity with the CIW.

Recently, Prax(us) hosted an art show exploring the intersections between human trafficking and reproductive justice, worker rights, immigrant rights and LGBTQ rights. Unfortunately, not all the incredible art can be shared on this blog but here is the piece that I submitted about the modern-day slavery in the fields of Florida: 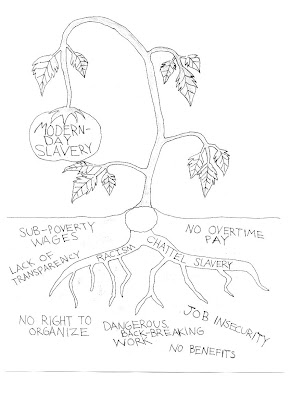 And here is an explanation I included with the drawing:

Farmworkers in the Florida agricultural industry face a wide range of human rights abuses, the most extreme of which is modern-day slavery. Since 1997, Florida has witnessed seven successful prosecutions of slavery rings - involving more than 1,000 workers forced against their will to harvest the food we eat.

Slavery does not occur in isolation however. Rather it flourishes from the fertile ground of "sweatshop conditions" and the historical roots of chattel slavery and racism. Tomato pickers earn just 40 to 50 cents for each 32lb bucket of tomatoes they pick - a wage rate that has not increased since 1978. A farmworker will earn $50 if she or he manages to pick two tons of tomatoes in a day. They do not receive sick leave, health insurance or benefits of any kind for performing this dangerous, back-breaking work all day. Farmworkers are explicitly denied the right to overtime pay and the right to organize or join a union - legal exclusions which can be traced back to Southern agriculture's demand for cheap Black labor.

Given this everyday, normal environment where farmworkers have so little control over the terms of their labor, it is all too predictable that at times the exploitation will tip over into the more extreme and brutal form of modern-day slavery.

I decided to display a simple photocopy instead of the original because it isn't intended to be fine art but rather an accesible and reproduceable tool for consciousness raising and dialog. It's inspired by the Coalition of Immokalee Workers (CIW) - a grassroots farmworker organization that has been instrumental in combating slavery in Florida's fields. The CIW uses popular education drawings, similar to this one, to collectively reflect on their experiences and forge a plan action.

You can download a copy of the drawing here.

Big news in the Campaign for Fair Food!
Bon Appetit - a leading food service provider for universities - has committed to improving the wages and working conditions of Florida farmworkers in another VICTORY for the Coalition of Immokalee Workers! See the CIW website for all the latest news: www.ciw-online.org.

Speaking of Chipotle, check out the last blog post for a point by point reality check of the claims that Chipotle's spokesperson makes everytime he's asked about the CIW.
Posted by DFF at 12:12 PM No comments: