Ohio Fair Food to Kroger: We will not be moved... 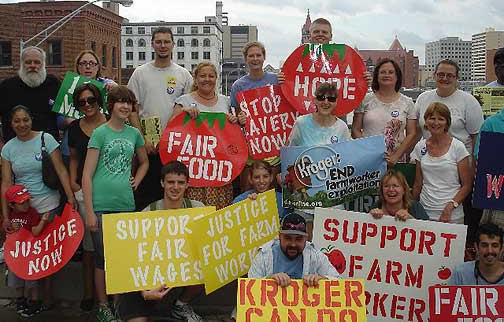 ... by half-measures and corporate double-talk!

This past Thursday, Kroger executives and shareholders gathered in Cincinnati, Ohio, for what was supposed to be a light-hearted, festive affair celebrating the company's economic success, marked by 30 consecutive quarters of sales growth. But the party was crashed (figuratively, mind you) by an exciting new Fair Food committee, Ohio Fair Food, whose members were determined to remind Kroger and its shareholders that those exciting profits come, in part, at the cost of unconscionable farmworker poverty and exploitation in Florida's tomato fields.

Kroger is the largest supermarket chain in the country and the parent company of Colorado's leading grocery King Sooper's.

Check out the Coalition of Immokalee Workers website for a photo report from this great action (it's the June 26, 2011 post)!
Posted by DFF at 11:13 AM No comments:

NC protesters: "Quiznos has no biznos paying less for our tomatoes!"

A couple week ago the Coalition of Immokalee Workers website reported on a protest in North Carolina outside a Quiznos restaurant. We wanted to share the story of this fun and creative demonstration as well.

Students took to the streets in Winston Salem, North Carolina -- with the venerable Student Action with Farmworkers -- in a colorful and creative protest last week outside a local Quiznos. Here's a first-hand photo report, straight from our long-time allies at SAF: 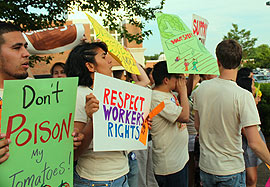 Friday June 3, 2011, in Winston Salem, North Carolina, thirty students gathered together to demand that Quiznos pay one more penny per pound of tomatoes picked by Immokalee farmworkers. These students joined together from the East Coast, West Coast, and Midwest to participate in Student Action with Farmworkers’ Into the Fields (ITF) summer internship and the Sowing Seeds for Change fellowship. Although they just met on the previous Wednesday, this diverse group of farmworker students and conscious Southeastern allies came together to promote justice and change. 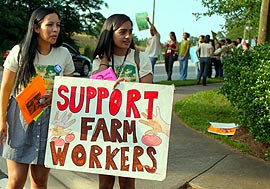 This vocal group lined up along a sidewalk directly outside the Quiznos shopping center and chanted shame slogans in both English and Spanish. Not only were these passionate individuals, but creative as well, coming up with slogans such as “Quiznos has no buiznos, paying less for our tomatoes.” In addition to the large group that was waving signs and marching on the sidewalk, several students dispersed fliers advertising the “Penny more per Pound” campaign and history. Many interesting conversations arose from sympathetic observers, including one man who remembered picking up tomatoes from Florida farms and being shocked by the conditions that the farmworkers faced on a daily basis. 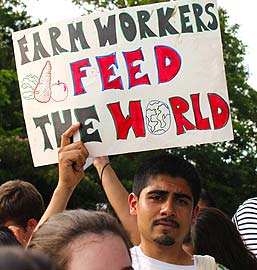 A delegation of students delivered an official letter outlining their demands of Quiznos to the store manager. The store manager was receptive to the group and said that he was concerned and supportive of the Penny more per Pound cause. Consequently, the manager agreed to sign the letter and send it to Corporate. 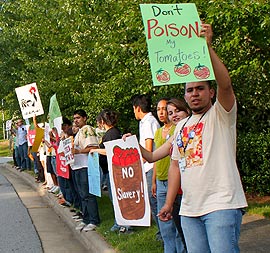 The satellite group of students that had spoken with the manager, and others that were dispersing pamphlets, all reunited with the larger marching group for the final moments of the action.

Great work, everyone! Summertime is clearly time for action in North Carolina.
Posted by DFF at 12:10 PM No comments: 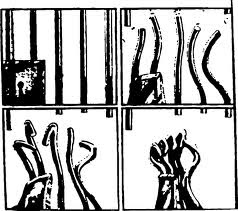 Join us outside the immigration detention center in Aurora in solidarity with all who are imprisoned, exploited or enslaved!

There will be a participatory performance exploring slavery as the common historic root of farmworker exploitation, mass incarceration of people of color and attacks on immigrants rights today.

We will also celebrate our legacies of resistance and ongoing strguggle for freedom.

WE INVITE YOU TO BRING NOISE-MAKERS PANS, WHISTLES,DRUMS, SHAKERS & YOUR VOICE!

Actions around the country!

The Denver Fair Food blog hasn't been especially active lately, but that doesn't mean nothing has been happening in the Campaign fo Fair Food. To the contrary, in the last several months there have been actions around the country targeting Publix, Stop & Shop, Trader Joe's and more. See the Coalition of Immokalee Workers website - http://www.ciw-online.org/ - for all the latest news.

We'd especially like to highlight our friends in Kansas and Texas. 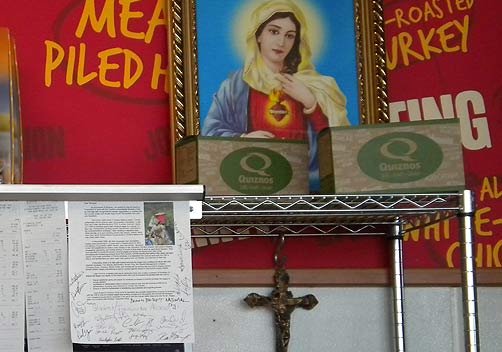 If you look closely at the picture here, you'll see in the lower left quadrant a copy of the CIW's Quiznos Manager Letter... hung up, behind the counter of a Quiznos in McAllen, TX... by the manager... for his customers and crew to read and learn about conditions in the fields where Quiznos buys its tomatoes!

During Farmworker Awareness Week last a couple months ago, members of the Student/Farmworker Alliance, Just Harvest USA and the RGV Fair Food Committee came together for a double weekend of actions that included rallies outside of Quiznos locations throughout McAllen, TX and a 7-mile bike ride, reporting:


"Managers were very supportive overall. One even pinned up our manager letter, signed by dozens of community members, inside their restaurant's wall for all their customers to see!"

This follows our report two weeks early that a franchise owner in Quiznos' corporate hometown, "surprised everyone by saying that not only did he fully support the idea of farmworkers receiving fair wages and working conditions but he actually spoke with Quiznos Headquarters and encouraged them to sign an agreement with the CIW."

Sounds like spreading protests by Fair Food communities across the country isn't Quiznos' only problem - they might just have a growing internal revolt on their hands, too...

More recently, in the middle of this great country, representatives from "the Fair Food Kingdom in the City of Lawrence from the Land of Kansas" (aka, our good friends at Lawrence Fair Food) playfully reminded a local Dillon store (one of the many chains owned by grocery giant Kroger which also owns King Soopers) of its responsibility to do its part in improving wages and working conditions in Florida's tomato fields.

Check out the great video:


There will no doubt be more action in the Campaign for Fair Food coming including right here in Denver...
Posted by DFF at 9:19 AM No comments: