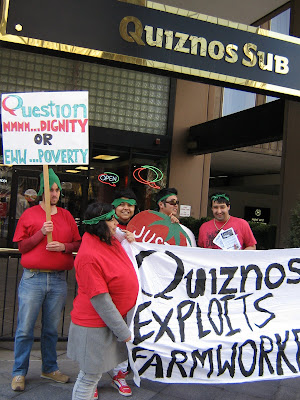 The first action of Spring Blitz for Farmworker Justice was a swift affair. A small cadre of tomatoes from Florida's fields - outraged at the abusive conditions conditions which they've seen the workers who pick them laborering under for decades - descended on Quiznos on Denver's busy 16th Street Mall in order to tell the Denver-based sub franchise that it must start supporting the pinciples of Fair Food established by the Coalition of Immokalee Workers.

The CIW's Fair Food principles are beginning to improve the wages and working conditions of tomato pickers throughout Florida. But for this new - and still fragile - era of human rights and dignity for Florida's farmworkers to thrive and grow, more companies like Quiznos need to place their substantial purchasing power behind the new higher standards. 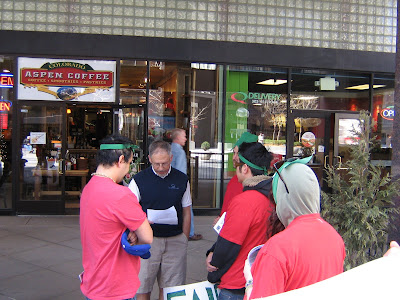 This was the message that the Immokalee tomatoes shared with this Quiznos franchise owner. The franchise owner surprised everyone by saying that not only did he fully support the idea of farmworkers receiving fair wages and working conditions but he actually spoke with Quiznos Headquarters and encouraged them to sign an agreement with the CIW. Unfortunately, Quiznos has not taken his advise, and until it does, protests will have to continue. 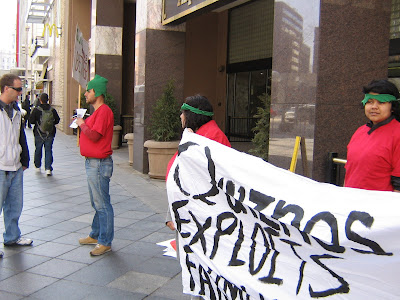 And more and more consumers will be awakened to the reality that Quiznos has refused to do its part to end the exploitation of those whose labor provides the tomatoes which top its sandwhiches. Within 15 minutes, the tomatoes outside this store had passed out well over 100 fliers to curious customers and passers by. When will Quiznos finally start listening to its customers, franchisees and . . . tomatoes?
Join us for the next Spring Blitz actions: