WHAT: Protest & Rally in solidarity with the Coalition of Immokalee Workers

For months, Quiznos has promised that it would soon be joining in agreement with the Coalition of Immokalee Workers to improve the wages and working conditions of farmworkers who pick tomatoes bought by the company. It is time to hold Quiznos to its word. Our New Year's Resolution is to escalate the campaign against Quiznos until the sub shop resolves to end human rights abuses in its supply chain.

BACKGROUND:
Florida farmworkers who pick tomatoes are among the nation's most exploited workers: they earn sub-poverty wages, have no right to form unions or to over-time pay, lack traditional employment benefits such as health, sick leave or pensions, and have not received a significant raise in nearly 30 years. At the current rate, a Florida tomato picker must harvest over TWO TONS just to earn the equivalent of minimum wage for a typical 10 hour. In the most extreme situations workers are held in modern-day slavery and forced to work against their will.

In 2001, the Coalition of Immokalee Workers - a grassroots organization of migrant farmworkers based in Florida - and their allies launched the Campaign for Fair Food, calling on retail food industry leaders to address the egregious working conditions and poverty stemming from these companies' high-volume/low-cost purchasing practices. As a result, the CIW has reached historic agreements with McDonald's, Burger King, Subway and others to directly improve farmworker wages and working conditions and set new standards for social responsibility in Florida agriculture.

Despite these breakthroughs, Quiznos - who profits from the exploitation of farmworkers due to the sheer volume of its tomato purchases - has yet to take responsibility. While there has been discussions with the CIW, those talks continue to drag on because Quiznos won't agree to the same Fair Food Code of Conduct that the entire Florida tomato industry has already adopted. Visit ciw-online.org for more info.
Posted by DFF at 10:35 AM No comments:

Our last action outside Quiznos corporate headquarters may have been a couple of months ago but we still wanted to share some of the great coverage it got. So here are two blog posts written by folks at Change.org.

First off there was this great peice by Amanda Kloer:

Move over, Glee cast — you're being overshadowed by farm workers' rights advocates. The Student/Farmworker Alliance recently choreographed their own Britney Spears song and dance number to rival the ones on Glee. But instead of being executed by a team of television stars, this one was done guerrilla style by a sidewalk flash mob outside Quiznos headquarters in Denver, Colorado. You can dance to Britney in spirit by signing the petition to tell Quiznos to be bold and stand for slave-free food. [Read more]

"The Coalition of Immokalee Workers is leading a transformation of Florida agriculture from an old system which brutally exploited farm workers to a new paradigm which values and upholds the human rights of workers,” Robert McGoey of Denver Fair Food says. “As a major buyer of tomatoes, Quiznos' purchasing power can either advance this transformation or can hold it back — thus delaying the hopes and dreams of thousands of farm workers.” [Read more]

According to the Change.org webpage each of these articles has been read by thousands of people!

And there have been hundreds of people who have contacted Quiznos to call on the company to ensure fair wages and human rights for farmworkers! You too can send an email to Quiznos by clicking here:
Tell Quiznos to Be Bold and Say No to Slave-Picked Produce
Posted by DFF at 4:08 PM No comments: 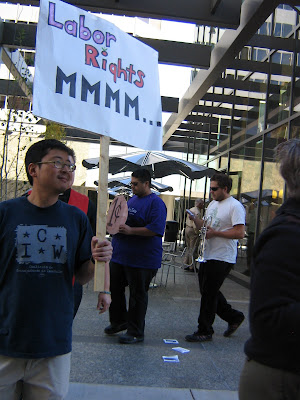 Take 30 seconds to send an email to Quiznos executives demanding that the company support fair wages and human rights for farmworkers:
Sign the petition here!

With the Coalition of Immokalee Workers and the Florida Tomato Growers Exchange announcing a landmark agreement to extend the CIW's Fair Food principles to over 90% of the Florida tomato industry, the future of fair wages and dignified working conditions for farmworkers is just over the horizon.

However Quiznos continues to stall instead of joining the efforts of the CIW to end sweatshop conditions, sub-poverty wages and modern-day slavery in Florida's tomato fields. Quiznos' stalling is delaying progress toward the more just food industry for which farmworkers have been fighting for so long.

Tell Quiznos that NOW IS THE TIME FOR FAIR FOOD!
Send an email to Quiznos by clicking here!
Posted by DFF at 2:56 PM No comments: