"Quiznos, the world is changing!!! When will you?" 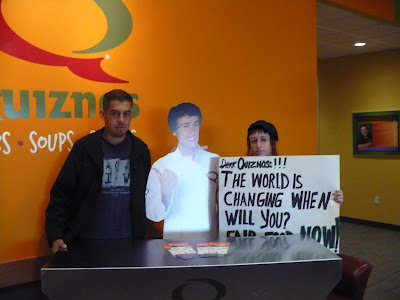 During the morning preparations for our action outside Quiznos headquarters last Friday, Gerardo Reyes Chavez (on the left) from the Coalition of Immokalee Workers quickly scrawled a sign reading "Quiznos!!! The World is changing. When will you?" His words cut to the significance of the current moment in the Campaign for Fair Food and the urgency of the need for Quiznos to join the potential tidal shift in farm labor relations in Florida (and beyond) which the moment represents.

Just last week, the CIW and Pacific Tomato Growers, one of the nation's largest tomato growers, announced a milestone agreement embodying the principles of fair wages, human rights and a voice for farmworkers for which the CIW has been fighting for so long. The agreement represents the first direct relationship between a grower and the grassroots, worker-led Coalition. Such a relationship would have been unimaginable just a couple years ago and is a profound break with literally hundreds of years of history during which farm owners have viewed farmworkers as little more than "machines in the fields."

Nonetheless, as Lucas Benitez of the CIW stated at the announcement of the agreement, "As we turn the page on this new chapter in Florida agricultural history, however, I do want to make one thing crystal clear. We are not today claiming that we have achieved the changes sought by the Campaign for Fair Food. Rather, we are announcing that we have forged a plan of action that gives us a realistic chance to bring about those changes."

The vision of a more just and humane agricultural system is teetering on the edge of becoming a reality. As a major buyer of tomatoes, Quzinos' purchasing power can contribute to pushing this reality into being or can serve to hold it back, delaying the hopes of thousands of farmworkers. With Pacific - in addition to the other leading Florida grower East Coast, two of the largest organic tomato producers, all Quiznos' leading fast food competitors, and the food service industry - now solidly behind the CIW's plan of action, there can be no acceptable excuses for Quiznos' failure to join the emerging Fair Food concensus. Justice delayed is justice denied, and unless Quiznos works with the CIW, it is supporting the intolerable status quo which is the human rights crisis in Florida agriculture.

"Quit Stalling, Quiznos!" Photoreport from the Action
With this dramatic background, a rowdy crowd - including not only a broad spectrum from clergy to students of the Denver community, but also our Fair Food companer@s from around Colorado, Kansas, New Mexico, Illinois and as far away as New York and Florida - convened on Quiznos headquarters. We had a simple message: Quzinos must quit stalling! 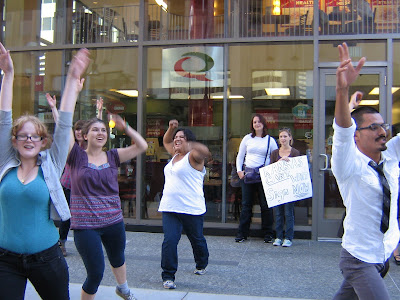 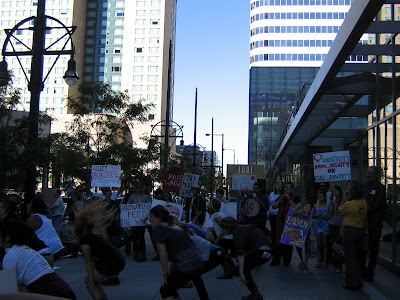 Never content with your average protest, the Fair Food activists kicked things off with a song and dance routine to the tune of "Hit Me Baby One More Time" to delivery our message.


"Quiznos, your stalling . . . is killing me (and I), I must confess I still believe (still believe) working conditions must be in line with human riiiiiighhhttts! This agreement you must sign!"
View the music video here, but beware, 'cause it'll get stuck in your head. 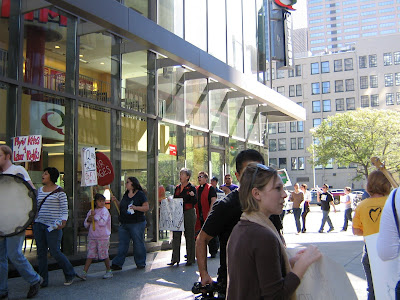 After a few inspiring words from Gerardo Reyes, we began a lively picket. Meanwhile, a delegation went upstairs to Quiznos headquarters . . . 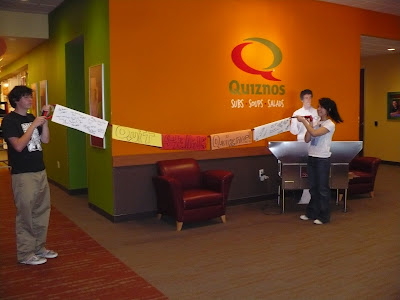 . . . to deliver a set of jumper cables to the sandwich franchise. In May, Quiznos promised us that it was pursuing an agreement with the CIW. Quiznos' words have rung hollow as the months have passed and there has been no progress on its part. We brought the cables as a gift to help Quiznos quit stalling and start moving in the right direction again. 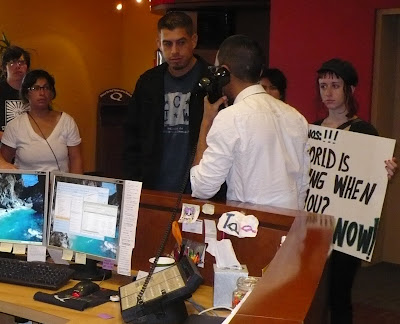 To our dissapointment, no one from Quiznos was willing or able to meet us and accept our gift. Eventually, a senior vice president got on the phone and spoke with Rudy Cortinas, national co-coordinator of the Student/Farmworker Alliance. But not only was the VP unwilling to meet with us in person, he refused to so much as listen over the phone to Gerardo Reyes from the CIW. And instead of affirming the importance of a partnership with farmworkers in the protection of human rights in Quiznos supply chain, he regurgitated tired explanations about how the company was taking its own steps to address the issue. The cold shoulder we received at Quiznos headquarters is a big departure from the respect for workers in its supply chain that Quiznos claims to embrace. 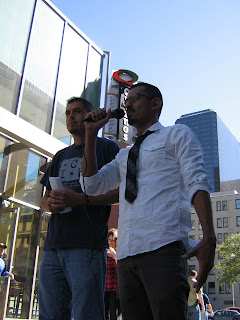 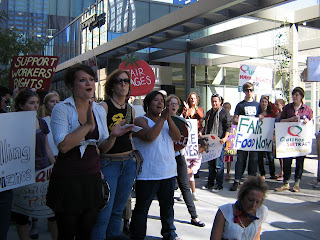 Gerardo closed things up by rallying the crowd to continue the struggle and indeed re-double our efforts to bring Quiznos to the table. Everyone present may have been frustrated having been snubbed by Quiznos, but we left more determined than ever to bring about justice for farmworkers in Quiznos' supply chain.
Posted by DFF at 8:58 AM