Slavery, Silence and the Food We Eat 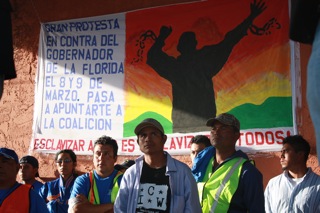 The Coalition of Immokalee Workers (CIW), a community-based human rights organization of Haitian, Mayan and Latino immigrant farmworkers in Southwest Florida, is asking people from around the country to “tell Florida Governor Charlie Crist to take a stand against slavery.”

Slavery? Yes, slavery. They are not speaking euphemistically; they are talking about situations meeting strict federal legal standards for what constitutes the criminal act of enslaving another human being. Since 1997, there have been seven successfully prosecuted cases of slavery – involving more than 1,000 farmworkers – in Florida’s agricultural industry. One federal prosecutor called Florida “ground-zero for modern slavery.”

As the CIW points out (see the 1/26/09 post), during the same time period Florida has had three governors and not once have any of them spoken out against what can only be called a human rights crisis in Florida’s fields. Every case of slavery that is prosecuted represents many more that are being investigated. And every case that is investigated represents many more that have not yet come to light or may never. Most importantly, every case of slavery grows out of the fertile ground of sweatshop conditions in which farmworkers toil everyday for sub-poverty wages without basic labor rights or benefits of any kind. Despite all this, the only comments to come out of the Florida state government have tried to minimize the significance and scale of the crisis.

Some may be thinking now, “well that’s all terrible, but it’s happening in Florida. Let them take care of their own problems. What’s that have to do with me?” According to the Florida Tomato Committee, Florida tomatoes account for 95% of all U.S. grown tomatoes eaten by Americans October to June. And 45% of all tomatoes consumed in the U.S. year-round are Florida tomatoes. Tomatoes are one of those crops where slavery has been prevalent. Supermarket chains and gigantic fast food corporations are major purchasers of tomatoes from Florida which means that it’s possible that the tomato for your salad tonight or on your hamburger for lunch may have been picked by slave labor.Some of these major tomato purchasers are companies based right here in Denver like Chipotle Mexican Grill. (After years of campaigning against it, Chipotle finally acknowledged the exploitation facing farmworkers who harvest its tomatoes. However it has still not taken the necessary steps to address the problem in a way that is accountable to workers and ensures they have a voice in the protection of their own rights.) The point is that even Colorado has received a little bit of the benefits of slave labor and therefore shares a little bit of the responsibility for ending it.

On another level, it undermines immigrant rights everywhere to allow the exploitation and even enslavement of immigrant workers in Florida to be so blatantly ignored. The subtle or not so subtle message Gov. Crist is sending is that there is no cause for alarm and outrage because those impacted are nobodies and deserve no regard, no respect, no rights. The more acceptable this logic becomes, the longer it goes unchallenged, the harder it will be for all immigrants to invoke their rights and dignity.And citizens face the repercussions as well. In fact, the victims in several of the Florida agricultural slavery cases were indeed US citizens. Indeed, the same system that is exploiting the labor of farmworkers is disenfranchising immigrants, is eroding the rights of workers everywhere and is depriving people of resources around the globe. We cannot let them set new lows in standards of others rights without risking the deterioration of our own. In one of the CIW’s early actions, hundreds of farmworkers marched on the house of a crewleader who had brutally beaten of one his workers, unified by the slogan “Golpear a uno es golpear a todos.” To beat one of us is to beat all of us. This is not rhetorical but quite literal: if one person’s rights can be violated than anybody’s can.

Take a minute to send an email to Gov. Crist:http://www.unionvoice.org/campaign/Governor_Crist_stand_against_slavery
Posted by DFF at 2:27 PM