When will we be satisfied? Delivering the open letter to chipotle and reflecting on the negotiable and non-negotiable in human rights 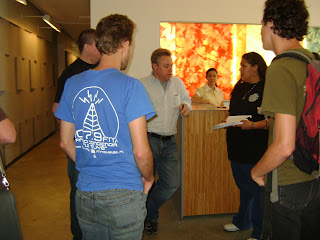 When we presented Chipotle with the names 16,000 people, including key leaders from the food justice and sustainable food movements – not to mention the makers of the very film that Chipotle CEO Steve Ells thinks everyone should go see – who signed an open letter to the company stating that “we view the CIW’s struggle for dignity as a non-negotiable part of the struggle for a sustainable food system,” the company did not embrace the call of thousands of concerned consumers that it “work with the Coalition of Immokalee Workers as true partners in the protection of farmworker rights.” Instead the company told us, in more words or less, that the human rights of farmworkers are negotiable and can be negated for their business preferences.

To give a little background, in July Chipotle announced that it was sponsoring 32 free screenings around the country of the hard-hitting new documentary Food, Inc. As part of its long-running efforts to align itself with the growing movement for sustainable food, Chipotle explained that “the issues raised by the film Food, Inc. are important and complex, and everything we do at Chipotle strives to address them.”

But the many allies of the Coalition of Immokalee Workers were not about to let Chipotle off the hook so easily. For far too long, Chipotle has left out a vital perspective from its vision of sustainable food – that is the view from farmworkers, the women and men who perform the difficult and dangerous work of harvesting the food we eat. Just a few weeks before Chipotle announced it’s Food, Inc. promotional deal, more than two-dozen prominent activists from the sustainable food and food justice worlds issued the above-mentioned open letter to Chipotle. Among the letter’s signers are none other than the director of Food, Inc. Robert Kenner and co-producer Eric Schlosser (author of Fast Food Nation).

Outside the Chipotle-sponsored Food, Inc. screenings, Fair Food activists circulated the open letter among moviegoers and collected more signatures of support. American Rights at Work, a Washington, D.C.-based labor rights organization, also circulated the letter nationwide and encouraged concerned consumers to call and Tweet Chipotle. In the resulting public relations blow back, food, social justice, environmental blogs and even an investor blog scrutinized the contradiction between Chipotle’s stated committed to “food with integrity” and its failure to adequately address the human rights crisis faced by the farmworkers. Robert Kenner and Eric Schlosser also reiterated their support for the CIW and their disagreement with Chipotle regarding the company’s response to the Coalition.

All told, activists spoiled Chipotle’s public relations party in over a dozen cities, generated hundreds of tweets (becoming a top Twitter petition) and made over 600 phone calls to Chipotle headquarters. More than 16,000 people emailed Chipotle and added their names to the open letter. 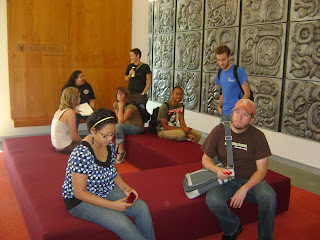 Knowing that emails and phone calls can be ignored all too easily, last Wednesday members of Denver Fair Food along with compañeros from Denver’s labor, student and community organizations delivered in person to Chipotle headquarters the open letter with all its signers.

The two Chipotle public relations spin doctors – Chris Arnold and Joe Stupp – who eventually met with us seemed untouched by many signers to the letter insisting to us that, while Chipotle isn’t willing to join in formal agreement, they are “working with the CIW” to find a grower who will pass along the penny-per-pound wage increase to the workers.

But Chipotle is unwilling to guarantee that it will not back out of its penny-per-pound payments, unwilling to share information about its supply chain or verify that it is doing what it claims, unwilling to include the CIW in the development and enforcement of a worker rights code of conduct for its tomato suppliers, and unwilling to maintain an open line of dialog with the CIW about these issues – hardly what could be described as an “working relationship.” It’s Chipotle's equivolent to confusing flirtation over a phone dating service with the bonds of holy matrimony.

Eventually the Chipotle representatives conceded that “we are working with the Coalition of Immokalee Workers . . . okay maybe not to their satisfaction but we are working with them.” In one of his most famous speeches, MLK stated: “There are those who are asking the devotees of civil rights, ‘When will you be satisfied?’” To which he reponded: “We can never be satisfied as long as the Negro is the victim of the unspeakable horrors . . . as long as our children are stripped of their self-hood and robbed of their dignity . . . No, no, we are not satisfied, and we will not be satisfied until ‘justice rolls down like waters, and righteousness like a mighty stream.’”

Likewise, today the CIW cannot be satisfied with the actions Chipotle has taken in response to the dire crisis faced by farmworkers. Farmworkers deserve a fair wage, and none of us can be satisfied as long as Chipotle refuses to guarantee that it will not back out of its commitment to contributing to one. Farmworkers have a fundamental right to have a voice in the industry of which they are a part, and we will never be satisfied as long as Chipotle denies them the ability to participate in the decisions which impact their lives. Proctecting the rights of farmworkers is not possible without transparency about purchasers’ business practices, and we cannot be satisfied while Chipotle continues to meet us with only secrecy and closed doors. We cannot be satisfied with Chipotle’s response any more than we can ever tolerate the existence of poverty, exploitation and slavery.

When we repeated our position – and the position of thousands of others – that “we view the CIW’s struggle for dignity as a non-negotiable part of the struggle for a sustainable food system,” the chipotle representatives told us that we should “recognize that things are negotiable and that there are no non-negotiables . . . recognizing that there is more than one way to solve a problem, instead of saying: here is the one solution – take it.”

There are certainly multiple solutions to any problem. But is that the same as saying there are no non-negotiables, nothing so fundamental, so valuable that it cannot be sacrificed? Human rights are non-negotiable; human dignity cannot be taken away when it becomes inconvenient. And therefore, the solutions to human rights problems must be embraced fully regardless of the burden. There are not steps which can be left out because they do not mesh with your preferences – not without compromising the solution for which you are working.

The fact is that Chipotle’s “solution” to the human rights crisis in Florida’s fields is not a solution at all. While no one from Chipotle would out right say that farmworker poverty is an acceptable price to pay so that Chipotle can avoid a binding commitment or that a little bit of slavery in its supply chain is preferable to joining in a formal agreement with the CIW, Chipotle’s actions speak loudly that continuing its preferred manner of doing business is more important to it than doing everything possible to ensure that farmworkers’ human rights are respected. Without accountability, transparency or the participation of farmworkers, there is no vehicle through which to make human rights in the fields a reality and all Chipotle’s promises amount to little more than words on paper – pretty maybe, but meaningless.

These are principles far too important to be negotiable – to be sacrificed for the sake of other interests – because they form the very basis upon which farmworkers can actualize their human rights and dignity. If Chipotle proposes an innovative new way for implementing these principles or thinks a particular idea is best suited to its supply chain, then I’m sure the CIW will listen with open ears. There is more than one way to solve a problem. But until then we will never be satisfied.

“No, no, we are not satisfied, and we will not be satisfied until ‘justice rolls down like waters, and righteousness like a mighty stream.’”

View the unedited video from our debate with Chipotle’s PR reps: