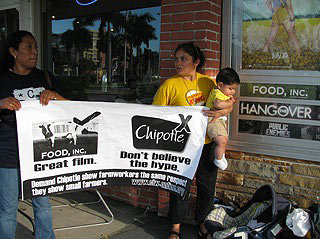 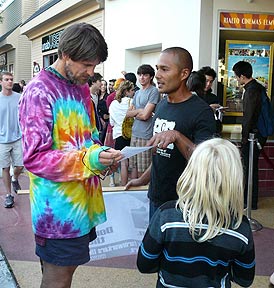 From our friends at American Rights At Work - a new action against Chipotle:

Chipotle's PR efforts are backfiring...
Call 1-888-899-0017 and add your voice!
Since we asked you a few weeks ago, more than 10,000 activists, signed the open letter to Chipotle, urging the company to stand up for exploited Florida farmworkers. (Sign the open letter here!)
Momentum is building. People around the country have been calling on Denver-based Chipotle to live up to its "food with integrity" promise - and now they've taken their demands to the streets, protesting in front of film screenings sponsored by Chipotle.
Can you back the efforts of these demonstrators by making a quick toll-free call to Chipotle's corporate headquarters?
Calling is easy to do: just follow these three easy steps:
1: Call Chipotle toll-free at:
1-888-899-00172
2: Tell the person who picks up the phone - or leave a message - saying that you want Chipotle to live up to its "food with integrity" promise by standing up for Florida farmworkers.
You can also add:
- The Florida workers who pick Chipotle's tomatoes have one of the worst jobs in America, with sub-poverty wages, back-breaking labor, and unimaginable exploitation.
- It's time for Chipotle to join in a formal agreement with the Coalition of Immokalee Workers - a widely respected farmworker organization and a leader in the field of human rights.
- Partnering with the Coalition of Immokalee Workers will ensure the workers who pick Chipotle's tomatoesare treated fairly and paid a living wage.
3: IMPORTANT: If you get to talk to anyone at Chipotle, tell us how it went - email denverfairfood@gmail.com.
Hoping for a bit of good publicity, Chipotle has been sponsoring screenings of Food, Inc., a new documentary about injustices in the food system.
It's a good film - but Chipotle doesn't seem to be getting the film'smessage - they've refused to join in a formal agreement to build better working conditions for the Florida workers who pick their produce and face exploitation and poverty wages - even after the film's director and the film's co-producer demanded Chipotle to do this.
Activists have been demonstrating outside Chipotle's movie screenings to point out the hypocrisy, but Chipotle has tried desperately to stop the message from spreading - even going so far as to remove volunteers from tables they've reserved at the screenings!
Chipotle can't have it both ways. They can't claim to stand for "food with integrity" while ignoring worker exploitation in their supply chain. We're going to keep turning up the heat until Chipotle does the right thing and lives by their own "food with integrity" pledge.
And to do that, we need YOUR help! Please, call 1-888-899-0017 right now!
Thanks you for all that you do.
-The American Rights At Work Team
Posted by DFF at 11:45 AM