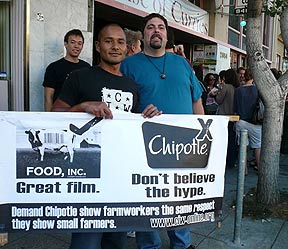 Chipotle is getting burned by the very scheme it cooked up as what it thought was a great public relations opportunitity - sponsoring free screenings of Food, Inc. - is becoming a PR fiasco.

Schlosser explains that while many of Chipotle's efforts are great, he nonetheless "cares more about human rights than any of those things." He continues: "If Taco Bell, Subway, Burger King, and McDonald’s can reach agreement with the CIW, I don’t see why Chipotle can’t."

Kenner likewise, the article states, "made clear that he disagreed with the company’s position on the CIW" even if he agrees with other things Chipotle is doing. Kenner explains: "I was hopeful that by associating itself with a film that promotes workers’ rights, [Chipotle] might be inclined to sign with the Coalition . . . And now I’m not confident they will.”

Our cameo in this unfolding fiasco is also noted: "Chipotle clearly resents such critical statements at events designed to demonstrate its sustainability cred. At one of its screenings in Denver, Chipotle employees barred people from the Campaign for Fair Food to speak after the screening—overturning an arrangement that had been made with Food, Inc’s public-education campaign. " After investigating the incident, the article decides: "In other words, people wanting to discuss the CIW issue aren’t to be given stage time at the Chipotle-sponsored Food, Inc. screenings."

Our story of Chipotle's eagerness to shut up members of Denver Fair Food has really made a splash on the internet, appearing on the websites of the Organic Cosumers Association, the Coporate Ethics Network, US Indymedia, and others.

Of course Denver wasn't the only city where Chipotle got heat from Fair Food activists while trying to bask in Food, Inc.'s glory. All over the country allies of the Coalition of Immokalee Workers took to the movies to deflate Chipotle's hot air about "food with integrity" with some sharp truths about farm labor in Chipotle's supply chain. See the great photo report from the nationwide "Battle of the Burrito" on the CIW website.

References to this PR fiasco are popping up in unforseen places such as thedailygreen or even more surprising the mainstream investor blog The Motely Fool. And the bed which Chipotle made for itself in which it now must lie can't be feeling any more comfortable.

The lesson for Chipotle to learn from its bungled Food, Inc. PR experiment? The ecorazzi blog has these fitting words: "you can’t have your 1000+ calorie burrito and eat it too."
Posted by DFF at 10:12 PM