Why were Fair Food activists kicked out of Food, Inc.? 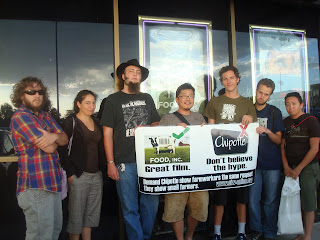 The Campaign for Fair Food and the new documentary Food, Inc. share – by any objective observation – a common vision and common struggle.

Food, Inc. is an urgent call to create a more just and sustainable food system while the Campaign for Fair Food has a broad network of people working on the ground to do just that.

The Campaign is seeking to raise awareness of the exploitation of farmworkers occurring in the shadows of our corporate-controlled food system – precisely the types of issues that Food, Inc. exposes.

All this would explain why Eric Schlosser, author of Fast Food Nation and a co-producer of Food, Inc., has been a strong supporter and active participant in the Campaign, and why, when speaking about the film, he has highlighted the work of the Coalition of Immokalee Workers as a prime example of meaningful change. And it explains why Schlosser along with the director of Food, Inc. Robert Kenner (and dozens of other prominent sustainable food activists) signed an open letter stating: “We view the CIW’s struggle for dignity as a non-negotiable part of the struggle for a sustainable food system.”

These facts also explain why members of Denver Fair Food arranged with the local theater and Food, Inc.’s national public education campaign so that we could table and speak briefly with the audience before a film screening.

What it doesn’t explain is why when we arrived at the theater a peppy young woman with a talent for faux-niceness told us that we would not be allowed to speak before the audience or to set up a table. Could it be because we were working to create a more just and sustainable food system, because we were distributing a letter signed by the filmmakers, because we were encouraging people take action to demand respect for farmworker rights?

As strange as it sounds, these are indeed the reasons we were kicked out of the screening of Food, Inc. To make sense of this, you should first know that:

- Chipotle Mexican Grill has long been the main campaign target in our efforts to create a food system that includes farmworker justice – efforts which Chipotle has ignored, avoided and resisted.
- The letter signed by the filmmakers that we were distributing is actually addressed to Chipotle, and lambastes the company for failing to ensure that the tomatoes in its burritos were not picked by exploited workers.
- And the action which we were encouraging was to demand that Chipotle finally work with the Coalition of Immokalee Workers in order to protect the rights of farmworkers.

As you may have guessed already, the woman who kicked us out worked not for Food, Inc. or the theater but for Chipotle. You see, Chipotle rented the theater that night – one of 32 free screenings of the film that it sponsored around the country – and did not want us pointing out the obvious contradiction between its sponsorship and its disregard for the worth and dignity of the women and men who harvest its tomatoes.

According to Chipotle, it was sponsoring the screenings because “the issues raised by the film Food, Inc. are important and complex, and everything we do at Chipotle strives to address them. Our philosophy of Food With Integrity is an active process of working back along the food chain . . .based on a foundation of not exploiting animals, the environment, or people.”

Chipotle can make such lofty claims only when it excludes farmworkers from its “philosophy.” When the fields from which Chipotle sources its tomatoes are the standard used to judge the integrity of its food, it cannot claim to not play a role in a system of food production based clearly on the exploitation of human beings. It cannot claim to be “working back along the food [supply] chain” while denying the farmworkers who actually work in that supply chain the ability to participate in the decisions about that supply chain which affect their lives. And it cannot claim to be addressing the issues raised by Food, Inc. and yet, when presented with an obvious path to address one such issue by committing to work with the CIW, be unwilling to take it.

Chipotle, despite trying to portray otherwise, is out of sync with the common cause articulated by Food, Inc. As Eric Schlosser, Robert Kenner and the other signers of the open letter to the company explain: “We applaud your goal of sourcing ‘food with integrity’ . . . Yet for us, naturally raised meat – important as it is – does not trump decently treated human beings.” Chipotle is stubbornly holding out against the progress achieved by the Campaign for Fair Food while those who truly want a sustainable food system – such as the makers of the film – are actively pushing the Campaign forward. There is a comic sensibility to seeing Chipotle hitch its brand image to the Food, Inc. bandwagon at same time as the film’s makers accuse it of “public relations damage control” in regards to its response to the CIW. Sadly the amusement is dampened when the reality sinks in that Chipotle’s sponsorship of Food, Inc. is a cynical attempt to exploit our dreams of a just and sustainable world as Chipotle is simultaneously suppressing farmworkers’ dreams of dignified working conditions.

Chipotle founder and CEO Steve Ells says, “I hope that all our customers see this film. The more they know about where their food comes from, the more they will appreciate what we do.” But if Chipotle’s customers knew that their tomatoes came from the exploitation of farmworkers and that Chipotle was not willing to take the necessary steps to do something about it, then they might not be so appreciative. In fact, they might be outraged; they might demand change, get organized and take action.

Chipotle knows this and thus doesn’t really want its customers to know the truth behind their food. That’s why we were kicked out of Food, Inc. And that’s why it was so important for us to be there.

Even though Chipotle ruined our plans to speak and even tried to have the cops called on us, we stuck around til the film got out 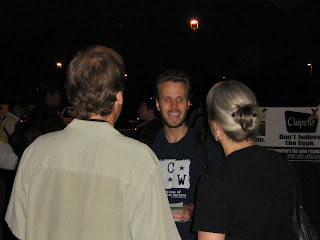 and passed out copies of the open letter to Chipotle to a very receptive crowd, speaking with well over a hundred people while proudly holding our banner reading: “Food, Inc. – Great Film. Chipotle – Don’t believe the hype.” What’s more, throughout the country allies of the CIW took to the movies with the same simple but compelling message.

Chipotle can certainly try as it will to shut us up but it would do better to heed the words of Victor Hugo: “no army can withstand the strength of an idea whose time has come.” Or to paraphrase the late Fred Hampton, you can kick a revolutionary out of a film screening but you can’t kick out a revolution.
Posted by Robert at 1:30 PM