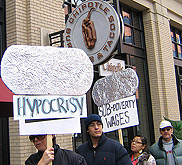 Dictionary: hy·poc·ri·sy
1. The practice of professing beliefs, feelings, or virtues that one does not hold or possess; falseness.
Dictionary: Chi·poc·ri·sy...
6/22/09: The phenomenon known as "Chipocrisy" was in the news this past week, beginning with the June 15th open letter by more than two dozen leading sustainable food activists calling on Chipotle to live up to its claims of "Food with Integrity" and "work with the Coalition of Immokalee Workers as a true partner in the protection of farmworkers' rights."
But it didn't stop there. Also last week, the ABC news show "Nightline" did a piece on Chipotle's relationship with Polyface Farms, a model sustainable farm in Virginia that, in the words of owner Joel Salatin, "fully respects and honors the pigness of the pig."
In the same Nightline story, Chipotle CEO Steve Ells professed, "I think it's really important that people know where their food comes from. I mean we spend a lot of time researching the very best sources, so that when people go to Chipotle, they can rest assured they are getting the very best food."
Really? The Nightline piece, while valuable for shedding light on Mr. Salatin's admirable operation, was incomplete, and therefore deeply flawed. By allowing Mr. Ells to effectively direct the spotlight, the story revealed only that part of Chipotle's supply chain that the company wished to showcase, creating the impression of an ethical restaurant company that indeed earns its claim to "Food with Integrity."
If, however, Nightline had only turned that same spotlight on the fields where Chipotle's tomatoes are picked, perhaps it would have found that the "humanness" of the men and women who pick those tomatoes isn't afforded the same honor or respect.
This might be a good moment to quote a relevant passage from last week's impeccably-timed sustainable food movement letter to Mr. Ells:
"... (F)or us, naturally raised meat – important as it is – does not trump decently treated human beings... Your company has shown admirable leadership in working with – and incubating – meat suppliers willing to meet your higher standards. But your failure to do that same hard work in the Florida tomato industry – together with the Coalition of Immokalee Workers (CIW) – threatens to render your announcement an empty gesture aimed more at public relations damage control than an effort to make real change."
Chipotle's failure to live up to the virtues it professes to hold dear was not lost, however, on one Denver-based blogger last week. Writing on the Denver Fair Food blog, "Robert" noted that, on its corporate website, Chipotle strongly recommends that its customers read Eric Schlosser's hard-hitting analysis of the fast-food industry's ills, "Fast Food Nation". The contradiction was too much to stomach for the Fair Food blogger, who undoes Chipotle's claims to sustainability using a series of quotes by none other than Mr. Schlosser himself. His conclusion is withering, and it shall be our conclusion here as well:
"... It’s abundantly obvious. Quoting Eric again: 'the exploitation of farm workers should not be tolerated in Florida. It should not be tolerated anywhere in the United States. There are many social problems that are extremely difficult to solve. This is not one of them.' Plain and simple, the solution is for Chipotle to work in partnership with the CIW. That’s been Eric’s demand of fast-food companies for a long time and that’s his demand explicitly of Chipotle today.
"It’s funny really, Chipotle isn’t listening to the guy that Chipotle recommends everyone listen to. Chipotle’s 'further reading' is demanding that Chipotle go further, and yet Chipotle refuses to take its own advice. This is a phenomenon that’s become so common place we have a name for it: Chipocrisy.
"That’s the thing about further reading – sometimes you end up eating your words."
Read the Denver Fair Food blog post in its entirety here.
Posted by DFF at 10:22 AM