Steve Ells Challenged to a Debate on the Merits of the Campaign for Fair Food! 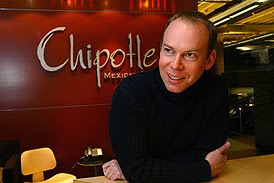 In an incisive critique of Chipotle's asinine excuses for not joining the Campaign for Fair Food, Food and Society Fellow Sean Sellers has thrown down the virtual gauntlet and challenged Chipotle CEO Steve Ells to a debate. Below is an excerpt from the must-read article.

“Of course I’m not in favor of slavery! But signing an agreement [with the Coalition of Immokalee Workers] does not actually change those conditions for farmworkers,” Steve Ells, CEO of Chipotle Mexican Grill, gibed in front of an audience of 250 at the University of Pennsylvania’s prestigious Wharton School of Business on November 19. “I mean, they just don’t see the bigger picture,” he continued. “To change the fast-food paradigm is huge. We’re trying to do the right thing.”

Ells’ defensive posture came in immediate response to a question posed by Marina Saenz-Luna, a staff member of Just Harvest USA, who works closely with the Florida-based Coalition of Immokalee Workers (CIW). Since 2006, the grassroots farmworker organization has petitioned Chipotle – a leading fast-casual restaurant chain specializing in gourmet burritos – to enter into an agreement to improve wages and working conditions for Florida tomato pickers. Four years later, farmworkers’ and consumers’ stomachs have soured in light of Chipotle’s persistent hostility towards the workers’ organization.

It didn’t have to be this way. Ells founded Chipotle in 1993 with an $85,000 start-up loan from his father. The venture has since bloomed into one of Fortune’s 100 fastest-growing companies with over 800 restaurant nationwide. Along the way, Chipotle has emerged as a self-styled leader in the fields of sustainable agriculture and socially responsible supply chain management through its highly publicized commitment to “Food With Integrity.”

Chipotle explains on its website that, “‘Food With Integrity’ isn’t a marketing slogan.” Rather, it “means working back along the food chain. It means going beyond distributors to discover how the vegetables are grown, how the pigs, cows and chickens are raised, where the best spices come from.” For his part, Ells, the chef-cum-corporate executive, reflects, “Learning about this dark side of modern agriculture made me want to find out how we could do things differently.”

Yet Chipotle has responded to the human rights crisis in Florida’s fields – including seven federally prosecuted cases of modern-day slavery since 1997 – with silence, evasion, and cynical spin. And Ells seemingly has no compunction about using his high-profile speaking engagements to spread misinformation about the CIW’s Campaign for Fair Food and the impact of his company’s policies on farmworkers.

What is at stake is not mere public relations dividends or quarrels over the meaning of “integrity.” Chipotle apparently believes that farmworkers are incapable of developing mutually beneficial solutions to the problems they face within the agricultural industry. And though Chipotle is but a tiny player within a massive food industry landscape, their stance flies in the face of core principles painstakingly advanced by the Campaign for Fair Food over the past decade: farmworker participation in the protection of their own labor rights; supply chain transparency; and third-party verification and monitoring.

It’s easy to shut down debate and mock earnest criticism when one stands alone at the podium and holds the microphone. But a closer reading of the recent exchange between Ells and Saenz-Luna belies a festering insecurity within Ells and his company over its chosen course of action.

So here’s my challenge: Let’s have a real debate, Mr. Ells, at any public forum of your choosing. After all, if you can’t back up your position, then integrity demands that you change it.

Read the full article on here at Grist.org.
Posted by DFF at 8:04 AM