After the rally, there were still two final expressions of our solidarity with the Coalition of Immokalee Workers.

Everyone first signed a giant postcard addressed to Quiznos CEO Rick Schaden calling on the company to work with the CIW in the improvement of wages and working conditions for farmworkers. A delegation of allies then hand devliered the postcard to Quiznos Corporate Offices. A friendly woman from Quiznos' PR department accepted the postcard and told us that Quiznos has already made a great deal of headway toward reaching an agreement with the CIW and they were hopeful one would be reached very soon. We told her that we are very encouraged these positive developments and we would be watching very closely to make sure the discussions become a working partnership with the CIW . . . And should that fail to happen, well, then our campaign would not only continue but grow. 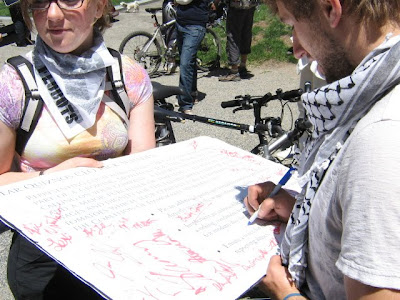 Meanwhile, those of us outside were flying kites hoping to send a visual symbol to the windows of Quiznos' second story suite of our support for the delegation inside. We have to admit that we felt a little like David vs. Goliath with our puny kites in front of Quiznos massive building . . . 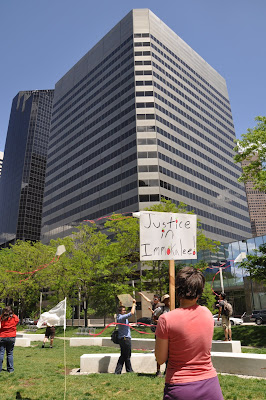 Go to Wrap Up