At Quiznos corporate offices, we were joined by many others from the Denver community and our numbers quickly swelled to nearly 100 people. The group, eager for action, jumped into a picket in front of Quiznos' flagship restaurant which sits just 100 feet or so from the entrance to the headquarters. 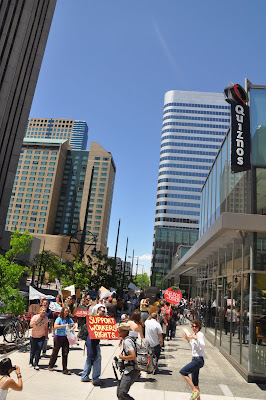 Of course, Denver wasn't the only city represented that day. There were folks from all over the country such as this young woman with the "Detroit loves the CIW" sign who is active in her town's own inspiring Food Justice movement - turning the abondoned lots of America's first post-industrial city into a burgeoning osasis of community-run urban agriculture. No doubt the activists hailing from Albuquerque to Atlanta, Portand to Philidelphia (many of whom were attending the White Flag Warriors Institute) will be taking with them back to their home communities a desire to continue fighting for fair food. 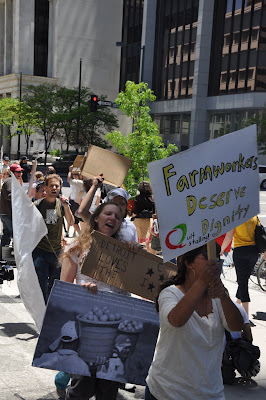 The picket was an engergizing testament to people's collective power and filled us with the knowledge that, working together, we can change a system even as mighty as the fast food industry. Things wound up with a short rally outside the restaurant at which the amazing Ashara Ekundayo (lower right-hand corner) spoke. For those who don't know Ashara, her many hats (which are almost too numerous to count) include poet, ARTivist, co-founder of Cafe Nuba and the Pan African Arts Society, mother, Food Justice organizer, Sustainability Director at the GrowHaus, and social entrapenuer with the startup company Blue and Yellow Logic "cause it takes more than one color to make green." 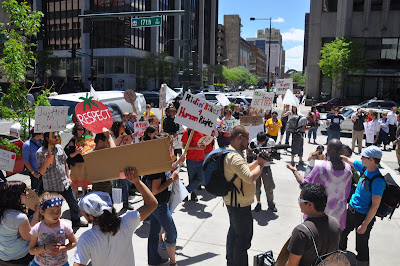 Ashara was followed by Robert McGoey from Denver Fair Food who read a statement from the Coalition of Immokalee Workers. The statement (which can be found in it's entirety here) read in part: "You all in Denver encourage us and fill us with hope and the spirit of struggle knowing that this movement is made up of deeply committed allies like you. . . Quiznos is closer than ever to adopting the principles of Fair Food. That's why today's action is so important and why it is more important than ever to keep up the pressure . . ." 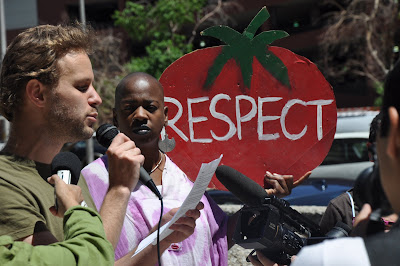 Finally, the rally concluded with an old friend who's joined us at other actions: the Penny who wanted to share a song about one of the central demands of the campaign which he knows a little something about . . . 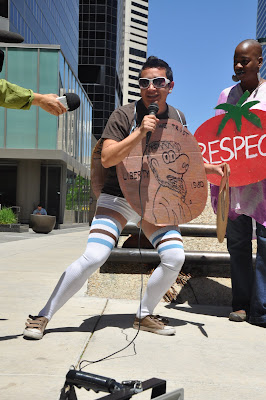 We'll finish Part 3 with his words:
Did someone say a Penny?
Just one tiny little cent!
How could a copper penny
Most righteously be spent?

Invest me wisely, I would say
No Quiznos for me, no way
Not till they sign AND agree to pay…

Just one penny more a pound, that’s all!
Just one itsy bitsy cent
For these workers to stand TALL
I say that’s a cent well spent!