Things are heating up for Chipotle!
Join CIW and Allies in Demanding Rights and Dignity for Farmworkers at Upcoming Denver "Cultivate" Festival
When: Saturday, October 6th, 10am-4pm and 4:00pm procession and vigil
What: Chipotle's "Cultivate Festival" - a celebration of the company's self-proclaimed promise to serving "food with integrity" - lacks a major ingredient: a commitment to the farmworkers who harvest tomatoes sold in their stores. The Coalition of Immokalee Workers has asked Chipotle for six years to join their acclaimed Fair Food Program, but while the corporation advertises its humane treatment of animals, it has thus far neglected to uphold basic standards for farmworkers.
Join us in calling on Chipotle to live up to their ethical image by joining the CIW's Fair Food Program -- because a vision of "food with integrity" that excludes farmworkers has no integrity at all.


10:00am - 4:00pm: Join us for a series of creative actions, street theater, tomato bucket installation, costumed flyering and more! (For a full schedule and to get involved email jake@justhavestusa.org)
Where: City Park (East of Ferril Lake; see red star on map below)

4:00pm: A march around the festival perimeter, stopping at each festival entrance to ask for entry, followed by a vigil
Where: Gather for march in front of the Denver Museum of Nature and Science (Colorado Blvd & E. Montview Blvd; see orange "M" on map below). If you are unable to march, join us for the vigil east of Ferril Lake (at the red star on map).
Website: Cultivating - Justice - Transparency - Partnership
Please share: Facebook Event 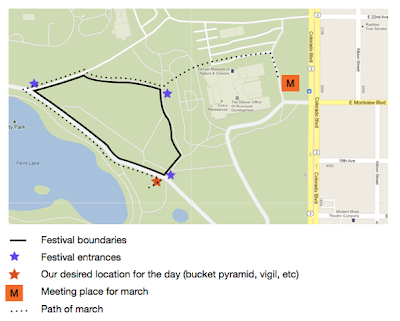 Background: Following ten major victories, including the recent agreement with Trader Joe's, the CIW has developed the Fair Food Program - an historic partnership between farmworkers, tomato growers, and retail corporations. Through their commitment to the Program, these corporations are paying a penny-per-pound premium to lift farmworker wages and have committed to buying only from growers who meet a strict set of labor standards.
Yet, despite its claim to be the fast-food leader in social accountability, Chipotle has for years refused to sign a Fair Food Agreement and thus and is under no obiligation to stop buying tomatoes from growers where workers' rights are violated.
Further Information:
Chipotle's Top Ten Falsehoods, Fibs and Fabrications about the Campaign for Fair Food
Just Harvest USA: Chipotle Campaign
Coalition of Immokalee Workers