Philly turning up the heat on Chipotle 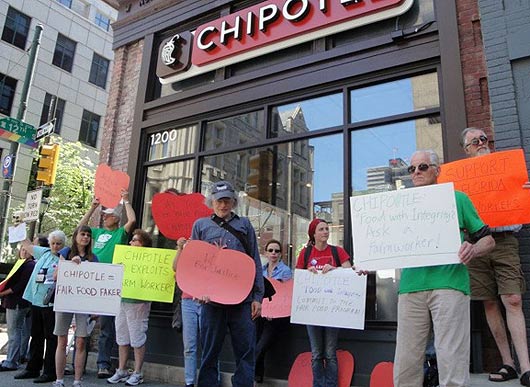 "Fair Food Fridays" wrap up in Philly, but pressure won't let up in the fall; Rabbis for Human Rights - North America says "Now the focus is on Chipotle"!

With Chipotle's "Cultivate" Festival -- and the CIW's alternative Fair Food Festival -- now just two weeks away, and with the advance team of CIW members and allies already in place laying the groundwork for what should be an exciting event in the Windy City, the pressure is picking up on the self-styled "Food with Integrity" leader throughout the Fair Food nation.

In Philadelphia, where the dogged members of Philly Fair Food have held weekly lunch hour protests at local Chipotle restaurants throughout the summer (a little thing they liked to call "Fair Food Fridays"), the summer series of protests wrapped up with a lively picket (above) and manager delegation yesterday. Here's how they framed their Friday protest campaign:

"Conscientious consumers across the United States are calling on Chipotle to honor the rights of farmworkers who pick the tomatoes that go into Chipotle burritos. Here in Philly, we plan to send a powerful message to the company. During each Friday lunch rush, we will picket one of the busiest Chipotle locations in the city. We will talk with customers about the Coalition of Immokalee Workers' “Fair Food Program” and make sure they know about Chipotle’s refusal to participate. We’ll ask customers to sign and deliver a letter to the restaurant manager that asks the company to live up to its ethical image by joining the program." read more

This unrelenting campaign of protests led by students, parents, faith leaders and burrito-lovers resulted in the delivery of over 100 manager letters by disillusioned Chipotle patrons. Week after week, the group returned to convey their message: "Food with Integrity" that dismisses worker participation, lacks transparency and rejects commitment to verifiable enforcement actually has no integrity at all.

Now that the summer's over and Fair Food Fridays are a wrap, are the Philly Fair Food lovers turning down the heat on Chipotle? Hardly! Here's the message after Friday's protest on their facebook page:

"Center City Chipotle, we'll be back to see you soon. Next up, University City!"

Meanwhile, another great CIW partner, the Rabbis for Human Rights -- North America, is leading the Jewish community across the country in the fight against modern-day slavery, and a key arrow in their quiver is their support for the Campaign for Fair Food. RHR-NA played a leading role in the Trader Joe's campaign, and now, in an interview with RHR-NA Director Rabbi Rachel Kahn-Troster, it is clear that they will be turning their considerable clout on Chipotle:

"This change in the lives of the Florida farm workers reflects the growing success of the CIW campaign, which has support from a broad coalition of human rights, labor, and religious groups such as RHR.

The core of the campaign is to pressure the large customers of the tomato growers to buy only from suppliers who treat their workers properly.

“The first victory was Taco Bell. Then a bunch of other fast food chains followed: Burger King, McDonald’s, Subway. Whole Foods signed on, and then Trader Joe’s last winter,” Kahn-Troster said [Rabbi Kahn-Troster is pictured above, rear, with her daughter in the foreground, holding the "Do Your Part" sign, at a recent Stop & Shop protest]...

... Now, the focus is on the Chipotle restaurant chain. Kahn-Troster said that some tomato purchasers say that they agree with the code of conduct; nonetheless, they haven’t signed the agreement.

“The problem for us as consumers is that if there’s not a legally binding agreement, they could change it tomorrow. If a grower was found to be using forced labor they would be suspended from the program, and Whole Foods and McDonald’s could no longer buy from them” but buyers who had not signed could do so.

But not too big a challenge the RHR-NA, or the Campaign for Fair Food! Check back soon for more news from Chicago as the advance team meets with student, faith, and community allies ahead of the big Cultivate Festival action this Sept. 15.
Posted by DFF at 9:58 AM