No Coast Encuentro a smashing success!

The No Coast Encuentro was a smashing success! Throughout the weekend of October 15-17, we gathered with allies from New Mexico, Kansas, Illinois and elsewhere. In those hectic three days, we formed new bonds with new friends from Boulder to Immokalee, renewed our committment to the Campaign for Fair Food, set a course for future action. (Unfortunately, one thing we failed to do was take many photos but here a few . . .) 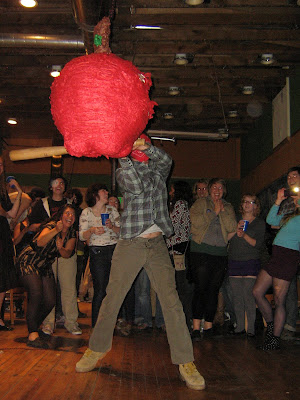 This photo was taken literally miliseconds before the pinata from our Saturday party was decimated and its sweet contents were released for the partygoers' enjoyment. The poor tomato pinata may serve as a good analogy for what is coming to those companies - such as Quiznos, Kroger and Chipotle - which continue to hold out against the Campaign for Fair Food and the rising tide of justice in Florida's fields. 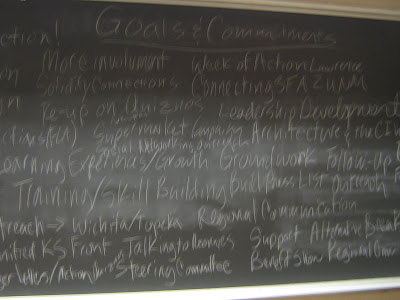 During the weekend, not only did we lead a powerful action outside Quiznos headquarters (see the photoreport here and the video here), we sharpened our organizing skills, shared ideas for future action and strategized around the next steps in the Campaign. Pictured above is a partial list of the many goals and committments that Encuentro participants made as we rapped up the Encuentro and head backed to our communities. Just like our sad paper mache friend, the corporate holdout are in for a beating. 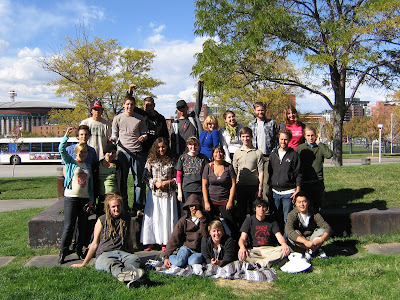 More than anything the Encuentro was an opportunity for people to get involved, to strengthen our movement and to build connections between the many communities fighting for Fair Food. This picture, the closest we have to a group photo, represents just a fraction of the well-over a hundred people who picketed, learned, shared, partied, cooked, strategized and otherwise contributed to the No Coast Encuentro.
Thanks to everyone who made the No Coast Enucentro a huge success!
Posted by DFF at 11:50 AM