Quiznos and Krogers and Sodexo, oh my! 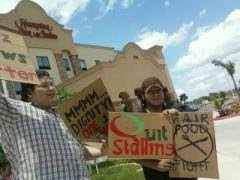 In these dog days of summer, there is lots of news in the Campaign for Fair Food. It seems that the corporate giants who've been profiting from farmworker poverty think that, just because the tempuratures are soaring, they can lounge around ignoring our demands as if this were some 4th of July BBQ. We wanted to give an update about what's happening with some of the companies that do business here in Denver which are campaign targets.

Quiznos - whose headquarters are in downtown Denver - told us several weeks ago that the company was in discussions with the Coalition of Immokalee Workers and hopeful about the prospect of an agreement. However, we're still waiting for Quiznos to turn discussions into concrete commitments. But that doesn't mean we're sitting on our hands. Our allies in Tampa, Florida and Mission, Texas have visited open houses at which Quiznos was trying to recruit new franchisees. Allies shared a strong message with the Quiznos representatives, put simply in the words of the Fair Foodistas from Texas' Rio Grande Valley pictured above, "Quit stalling!" Meanwhile, many others have been delivering letters to the managers of their local Quiznos restaurant, a simple action which anybody can take part in.

On another front, at the annual stockholder meeting for Kroger (one of the largest supermarket chains in the country and parent company of Denver's own King Soopers), Kroger CEO David Dillon was presented with evidence that his comany was sourcing tomatoes from Pacific Tomato Growers, one of the farms where enslaved workers from the Navarette Case were forced to pick tomatoes. He was then questioned as to why Kroger has not choosen to work with the CIW like so many other major food retailers in order to put an end to such abuses. Dillon's response is perhaps the most pathetic attempt yet to defend a company's social irresponsibility. He pointed to the company's supplier code of conduct and its provision prohibiting forced labor (apparently without irony...), and then closed with the patently ludicrous statement that Kroger thinks "we can make more progress... working directly with the growers than we can by working with a third party." As the CIW joke about the explanation on their website: "Dillon then went on to say that criminals should police themselves, professional athletes should call their own games, and, of course, foxes should guard the henhouse... (OK, he didn't say those other things... but he might as well have)." (See the full story under the June 26, 2010 post.)

The absurdity of it all - first, defending your company's position by saying you already have a policy forbidding slavery in your suppliers' operations despite that you were just presented with evidence that slavery was occurring in one of your suppliers' operations; and then claiming that working with growers (who have not only allowed abuses to flourish for decades, indeed centuries, but who in fact have actively fought against progress toward a more just agricultural industry in Florida) is a better strategy then working with a grassroots, highly-respected human rights organization (aka "a third party") that has been recogized by the RFK Memorial Center, Anti-Slavery International and even most recently the US State Department for its unparalleled expertise, experience and success in combatting slavery in the US - deserves more scrutiny. Perhaps that will happen in a future post. But for now, if you think this is as ludicrous as we do, take a moment the next time you go to King Soopers to delivery a letter to the manager expressing your outrage.

Sodexo getting into hot water

Finally, international food service corporation Sodexo - who has contracts with schools through Colorado including ALL of Denver's major college campuses - has still not signed an agreement with the CIW. Since just April of last year, the SFA has helped the CIW secure Fair Food agreements with three of the foodservice industry's four leading companies -- Bon Appetit, Compass, and Aramark. Each of those agreements has helped raise the bar toward ever stronger, more enduring human rights standards for farmworkers in Florida's tomato fields. But Sodexo remains, stubborn and alone, standing against the tide of change. As this past school year wound down, students on campuses across the country where Sodexo operates began to set their sights on the foodservice giant, as evidenced the petition drive of students at New College in Florida. With students like those at New College refusing to take no for an answer, and the SFA readying for its annual student Encuentro in Immokalee ahead of the coming school year, this fall promises to be a hot one for Sodexo wherever it does business on college campuses.

Click here for more on how you can help make the SFA's "Dine with Dignity" campaign an unqualified success.
Posted by DFF at 1:48 PM