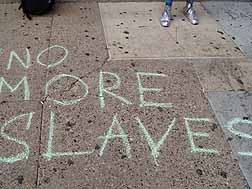 DOJ officials announce yet another prosecution for forced labor in Florida fields, eighth since 1997;

Gainesville Sun: "... dozens of Haitian nationals were the victims of human trafficking... when they were delivered to rural Alachua County and forced to work on area farms."

"... Federal prosecutors allege in the indictment that once the Haitian workers arrived in Miami they were denied access to their own passports and visas, effectively preventing them from going anywhere other than the farms where they were to work.

At least one worker told investigators about being forced to work in fields recently sprayed with chemicals so harsh they left her with permanent scars.

According to the indictment, those who complained about the conditions were threatened with being deported and became fearful of the three co-conspirators." read more

Perhaps even more remarkable than the charges was the response of the grower, vegetable farmer Steven Davis of Alachua County, to the possibility of losing the services of his longtime farm labor manager, Cabioch Bontemps. Despite the gravity of the charges against Bontemps, here's what Davis told the court (from the same Gainesville Sun article):

"... During Bontemps' court hearing, his longtime employer, Alachua County farmer Steven Davis, urged Mickle to release Bontemps because he is an integral part of the Steven Davis Farms pea and bean harvesting operations - www.stevendavisfarms.com - and this is the peak season for harvesting.

Davis identified his operations as being headquartered at 1102 N.W. County Road 233 and said that Bontemps has been a part-time worker for 14 or 15 years and an important full-time worker for the past two-and-a-half to three years. According to Davis, the Haitians currently working on the 2,000 to 3,000 acres he is farming this year all report to Bontemps.


The federal indictment also identified Bontemps as, "the man who raped one of the workers and told her not to say anything or he would make sure she would not be allowed to return to the U.S. in subsequent years."

Also telling about this latest prosecution is the fact that it took place in the H2A, or "guestworker," context.

Under the H2A program, agricultural employers bring foreign workers into the cou

ntry under temporary visas to work exclusively on the petitioning employer's farm. Guestworkers remain in the country only at the pleasure of their employer, they cannot change jobs, and they are obliged to return to their home country once their employer is finished with them, or face deportation. This arrangement places a tremendous amount of power over workers' lives in the hands of their employers, and in agriculture, this has frequently resulted in cases of extreme exploitation.

The CIW has long decried the potential for abuse inherent in the guestworker program. Here's an excerpt from a 2004 statement on a possible expansion of the H2A program under then-President Bush:

"... Not surprisingly, guestworker programs have been tried before, and they have failed miserably, often with tragic consequences. Between 1942 and 1964, for example, millions of Mexican workers were imported under an agricultural guestworker program (known as the ”Bracero” program) to work temporarily under contract to US growers and ranchers. The program was scuttled in 1964 after years of scandalous labor abuses. Europe, too, experimented with guestworker programs, which also ended in failure years ago.

Abuses such as those that eventually killed the Bracero program are inevitable, as the guestworker relationship is an extremely coercive form of labor relations. As a guestworker, not only does your employer hold your livelihood in his hands, but he also holds your visa, your very right to be in this country. With so much power concentrated under the employers’ control, it is hardly surprising that an inordinate number of recent prosecutions for modern-day slavery and forced labor have involved guestworkers, with cases ranging from New Hampshire to American Samoa. Indeed, the President’s proposal could well undermine efforts to fight slavery more broadly, as giving employers such wide control over their workers’ lives is a proven recipe for exploitation." read more

News of this latest slavery prosecution serves as a timely reminder of the dangers intrinsic to any plan to expand the current agricultural guestworker program (and in the current debate over immigration reform, there are many such plans in the works).

But, more broadly, it also underscores the urgent need for broad-based labor reforms in Florida agriculture. Stories of extreme exploitation are so tragically commonplace in Florida's fields that, rather than hear them as a call to action, we run the risk of growing inured to the abuse, each case of forced labor losing a measure of its ability to spark outrage and action.

We cannot let that happen. We must redouble our efforts to make this latest prosecution - now the eighth since 1997 - the last prosecution for forced labor in this state.

And food industry leaders - companies like Publix, Ahold, Quiznos, Sodexo, Kroger, and WalMart - must also, finally, heed this call, recognize once and for all the overwhelming case for change, and commit to work with us to bring about a more modern, more humane agricultural industry in Florida.
Posted by DFF at 11:37 AM