"Roses are red, violets are blue... 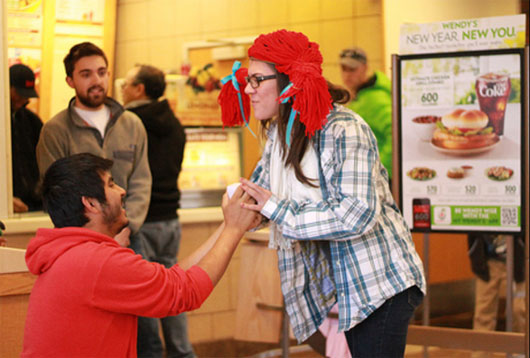 "...Sign the Fair Food agreement, Wendy's, it's the right thing to do!"
A month ago, Fair Food activists across the country visited their local Wendy's to deliver a message: It's time to join the rest of the fast-food industry and support the Fair Food Program. They promised to follow up their visits with a national week of Valentine-themed action if Wendy's failed to respond to their invitation to do the right thing.
This past weekend, those same consumers returned to Wendy's -- which responded to the call for social responsibility with a resounding silence -- and made good on their promise! Photos and reports have made their way into Immokalee from over a dozen cities, from a snowy march and protest in Cincinnati, Ohio, to a balmy rally in Miami where they delivered the catchy poem of unrequited love at the top of this post, and a creative bit of theater from Denver Fair Food (pictured above). And more are on the way. Check out the Coalition of Immokalee Workers website today for pictures and reports from some of those actions.
A here are some exclusive photos from the action in Denver! 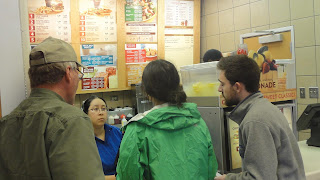 A delegation from Denver Fair Food went inside to speak with the manager before performing the above shown teatro in which workers and consumers "propose" to Wendy's that the company join the Fair Food Program. 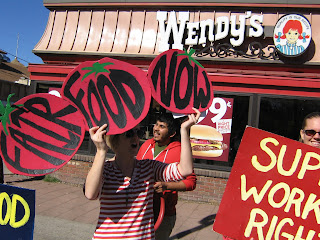 Meanwhile outside, we chanted... 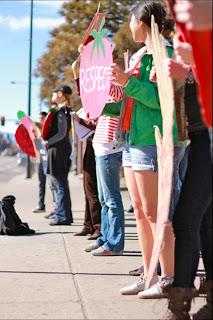 passed out our home-made valentines to Wendy's customers, educating them on about farmworker's struggle... 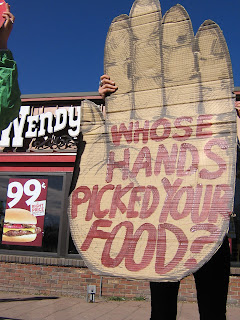 and, in the process, asked some tough questions of the "old fashioned" burger chain... 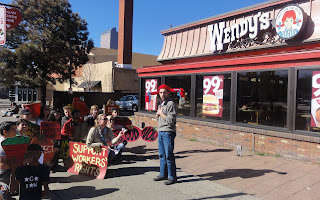 But, of course, we sill managed to have some fun.
Posted by DFF at 6:57 PM