"Quiz-No!": Quiznos protests spring up around the country! 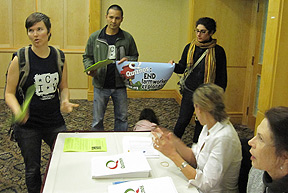 Protests against Quiznos are springing up around the country! In addition to the many actions that have been happening in Denver and the recent one in Texas' Rio Grande Valley, there have been protests in San Francisco, in the West, and New York to the East.

Pictured here in the Bay Area Fair Food crew crashing an open house at which Quiznos was trying to recruit new franchisees. Instead of just getting a slick sales pinch, potential Quiznos store owners were awakened to the reality of exploitation occurring in the fields from which Quiznos sources tomatoes and Quiznos' refusal to adopt the CIW's Fair Food principles which are establishing an era of justice in those fields.

Go to the Coalition of Immokalee Workers website for a quick photoreport of all the actions (including our most recent in Denver!):
"Quiz-NO!" Photo Report

And prepare yourself for the SPRING BLITZ For FARMWORKER JUSTICE coming up in March right here in Denver!
Posted by DFF at 3:40 PM