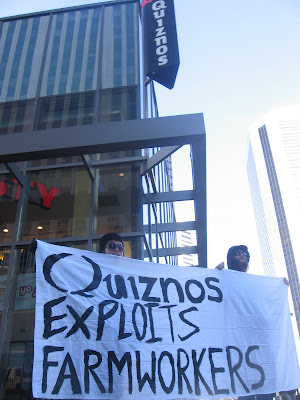 Come to this Valentine's-themed protest at Quiznos and show your love for farmworkers!!!

For months, Quiznos has promised that it would soon be joining in agreement with the Coalition of Immokalee Workers to improve the wages and working conditions of farmworkers who pick tomatoes bought by the company. But the Denver-based fast food chain continues to drag its feet, delaying the dreams of thousands of farmworkers for dignity and justice, and that's breaking our hearts!

BACKGROUND:
Florida farmworkers who pick tomatoes are among the nation's most exploited workers: they earn sub-poverty wages, have no right to form unions or to over-time pay, lack traditional employment benefits such as health, sick leave or pensions, and have not received a significant raise in nearly 30 years. At the current rate, a Florida tomato picker must harvest over TWO TONS just to earn the equivalent of minimum wage for a typical 10 hour. In the most extreme situations workers are held in modern-day slavery and forced to work against their will.

In 2001, the Coalition of Immokalee Workers - a grassroots organization of migrant farmworkers based in Florida - and their allies launched the Campaign for Fair Food, calling on retail food industry leaders to address the egregious working conditions and poverty stemming from these companies' high-volume/low-cost purchasing practices. As a result, the CIW has reached historic agreements with McDonald's, Burger King, Subway and others to directly improve farmworker wages and working conditions and set new standards for social responsibility in Florida agriculture.

Despite these breakthroughs, Quiznos - who profits from the exploitation of farmworkers due to the sheer volume of its tomato purchases - has yet to take responsibility. While there has been discussions with the CIW, those talks continue to drag on because Quiznos won't agree to the same Fair Food Code of Conduct that the entire Florida tomato industry has already adopted. Visit ciw-online.org for more info.
Posted by DFF at 8:55 AM