E-Action Alert! Let Publix know "Not in our house" isn't an answer when it comes to farm labor justice! 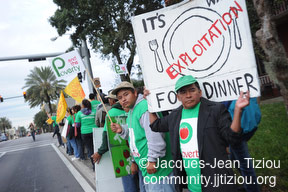 Tell Publix what you think about their "Not in our house" approach to social responsibility...

Next week nearly a dozen activists from Denver Fair Food along with hundreds of allies from around country will join scores of farmworkers from Immokalee in the Farmworker Freedom March -- a 3-day march on the headquarters of Florida-based supermarket giant Publix. But you need not go to Florida to take action: you can send a email to Publix CEO Ed Crenshaw! It only takes a minute but will powerfully amplify the message of those of us marching!

"We don’t like anybody coming into our house telling us how to do business."

That was Publix Communication Director Maria Brous's response to a reporter who asked whether Publix gets involved in the Fair Trade market. And while the answer was in response to a question about Fair Trade coffee and bananas, it sure sounded like it was aimed squarely at the Campaign for Fair Food.

Well, now you can march straight into Publix's house and tell them exactly how you want them to do business!

Click here to send Publix CEO Ed Crenshaw an email to express your "support for the Farmworker Freedom March and to urge Publix to work with the Coalition of Immokalee Workers (CIW), an internationally recognized farmworker organization, to address the sub-poverty wages and abuses faced by the farmworkers who pick Publix’s tomatoes."

For everyone who can't join us for next week's march, this is a great way to be counted and make your voice heard in the growing chorus demanding Fair Food. Send your email to Publix CEO Ed Crenshaw today!
Posted by DFF at 10:29 AM