Just last week, the Coalition of Immokalee Workers made this important announcement:

It's time for Wendy's to join the rest of the fast-food industry in the 21st century and support the Fair Food Program!

With one glaring exception, the top five largest fast-food companies in the world have joined the Fair Food Program, paying a penny-per-pound premium on the tomatoes they purchase from Florida growers and requiring their suppliers to meet the more modern, more humane labor standards contained in the Fair Food Code of Conduct.

Well, it's certainly not because we didn't ask. Between the CIW and the Alliance for Fair Food, we sent no fewer than five letters to Wendy's CEO's between 2007 and 2013, asking the hamburger giant to "meet as soon as possible... to discuss how your company can become a leader in socially responsible practices that ensure the human rights of farmworkers in your supply chain." You can see an example here. We even visited Wendy's shareholder meetings in 2010 and 2011 to ask in person.

What was Wendy's answer?

To the letters, nothing. And to the shareholder questions, pretty much the same thing, just in actual words. According to National Economic and Social Rights Initiative representative who asked the question on behalf of the CIW at the 2011 meeting in New York City (on far right, above), "the main points were that they have been aware of the Campaign for several years, they have their own corporate responsibility program that already covers the issues, but they are taking it under consideration." In short, nothing.

So ignorance is certainly no explanation for Wendy's absence in the Fair Food Program. In fact, here's the kicker... Wendy's new CEO Emil Brolick is the last person who could claim ignorance of the Campaign for Fair Food, because before Mr. Brolick was President and Chief Executive Officer of Wendy's, he was President and Chief Executive Officer of none other than Fair Food pioneer Taco Bell during the entire 4-yr boycott! Mr. Brolick ran Taco Bell from 2000-2006, then stayed in various leadership positions at Yum Brands, ending up as Yum's Chief Operating Officer before moving to Wendy's in 2011.

What has Wendy's been doing then, if not stepping up to the same ethical purchasing practices for its Florida tomatoes that its competition has adopted? .... Check out the CIW website for more.

Across the country, allies of the CIW have to visiting their local Wendys' to push the company to join the Fair Food Program, including here in Denver. 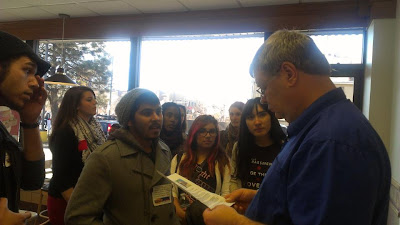 The Wendy's Campaign is already gaining steam as scenes like this play out across the country.  We're hopeful that Wendy's will see the writing on the wall and join it's fellow fast-food compatriots in the Fair Food Program before the campaign starts protesting in earnest. Check out the CIW website for more updates on the Wendy's campaign.