Why won't King Soopers listen to its customers? An action photo report

Still riding high from our recent victory in the Chipotle campaign, the Denver community held two actions during the Thanksgiving Week of Action.  Both sought to share our message with King Soopers and its parent company Kroger that it is time to come to the table with farmworkers and join the Fair Food Program. And both - in what might be a case of life imitating art - illustrated the ways in which Kroger has turned its back on both farmworkers in its supply chain and its own customers.  The first action can be called:

A Tale of Two Tables

To begin, check out this great video from the action: King Soopers: Come to the Table...

The action began with a dramatic visual representation of the Coalition of Immokalee Workers' long journey toward greater justice, dignity and respect for Florida's farmworkers and the progress that still needs to occur. 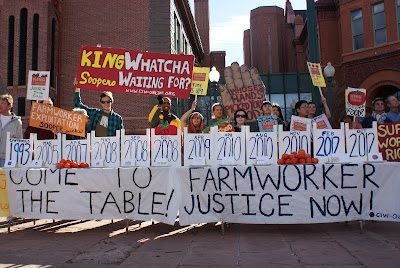 The first table, representing the Fair Food Program, depicted the broad array of disparate players in the food industry - from farmworkers to fast-food and grocery chains to tomato growers - who have come to work together as equals in order to end the human rights crisis in Florida's fields, all the while surrounded by dedicated allies who know that the fight to end the exploitation of workers at the other end of the food chain is a struggle to end their exploitation as well. 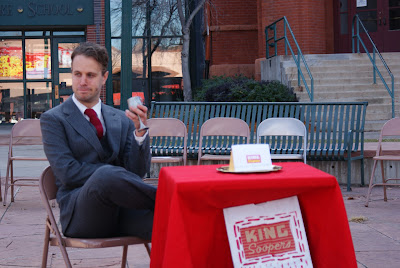 Meanwhile the second table depicted a smug and miserly executive from King Soopers sitting at a table by himself, his back turned to the table where so many others have congregated to ensure a more just and responsible agricultural industry. 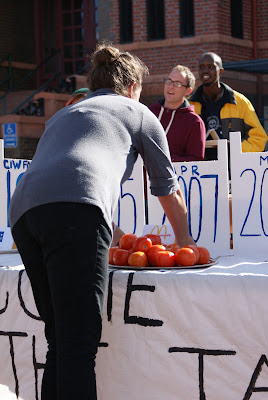 One by one, individuals set the table, going through the history of the Campaign for Fair Food, from the founding of the Coalition of Immokalee Workers in 1993 through the 11 corporations who've already joined the Fair Food Program including McDonald's, Subway, Whole Foods and just a couple months ago Denver-based Chipotle Mexican Grill.  All the while, King Soopers stubbornly clung to a "business as usual" mentality which has allowed exploitation to strive for so long and ignored the growing consensus. 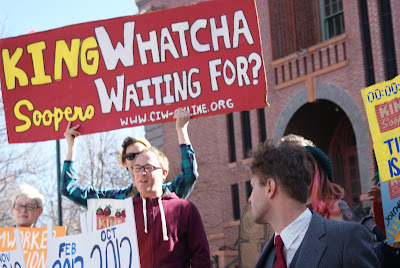 But after the giant table was finally set, an obvious question loomed over King Soopers' head. 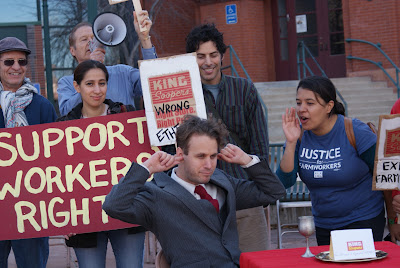 We called to the executive to "Come to the table!" Just like in our dramatic enactment, we know that King Soopers and parent-company Kroger will try to ignore us (just see below for what happened when we visited the King Soopers corporate offices). 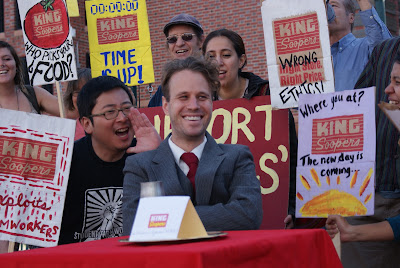 But we also know, every company, no matter how big, eventually cracks. 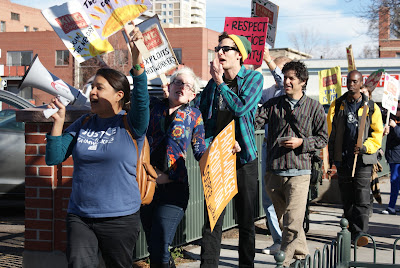 Armed with this knowledge, the crowd marched across the street and held a loud and powerful demonstration outside of King Soopers' popular supermarket in Denver's Capitol Hill neighborhood... 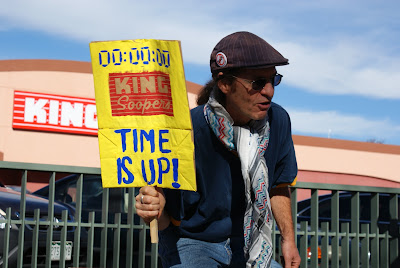 ...where we repeated old-time chants like "Down! Down! with exploitation!"... 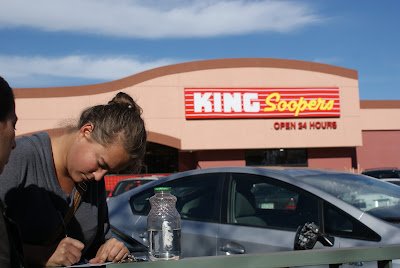 ...and introduced new people from the very supportive neighborhood to the Campaign for Fair Food.  Over one hundred customers signed postcards to Kroger that morning calling on the company to join the Fair Food Program.  Which brings us to our second action:

Why won't King Soopers listen to its customers?

On the Wednesday before Thanksgiving, Denver Fair Food visited King Soopers headquarters (Kroger's regional offices) to deliver the postcards we had gotten signed at the previous action. 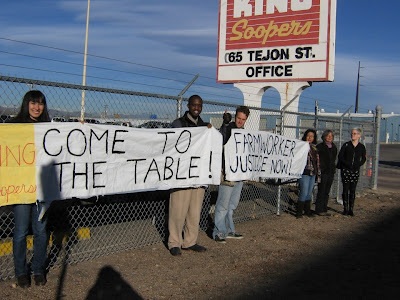 First we greeted King Soopers employees as they arrived for work in order to inform them of the need for Kroger to join the Fair Food Program. 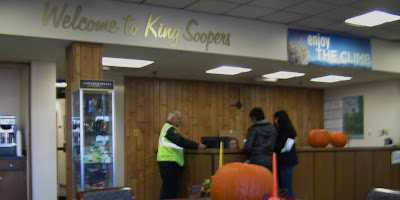 We then attempted to speak with a representative from the company and deliver the postcards representing the concerns of so many of us in Denver. However, just like in our street theater from the earlier action, no one from the corporate offices would speak with us. Instead we were asked to leave the property by a security guard. While we didn't expect our demands to be embraced on the spot but we also weren't expecting the cold shoulder. We left confused as to why a company that claims to care so much about its customers would be unwilling to listen to them, but we also left more determined then ever to make our voices heard. Once again like our enactment from the earlier action, we know that eventually Kroger, like so many before it, will eventually come to the table.
Posted by DFF at 8:20 PM