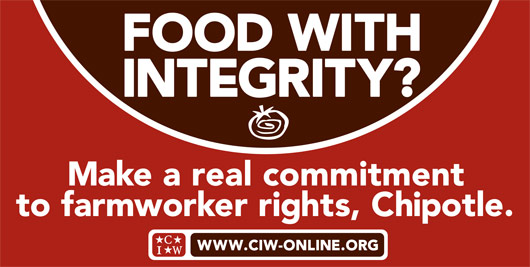 The Cultivate festivals are all part of a concerted outreach effort by Chipotle to distance itself from the image of a traditional fast-food company and to woo the country's growing "Good Food" movement. As Chipotle CEO Steve Ells said in a recent article about the shift in the company's marketing strategy ("Chipotle shifts marketing approach, reports 8% comps increase," fastcasual.com, 7/23/12):
Despite Chipotle's claim to be the fast-food leader in social accountability, the burgeoning restaurant chain has for many years now refused to sign a Fair Food Agreement, an agreement four other leading fast-food companies signed long ago, including McDonald's, Chipotle's former parent company. By signing a Fair Food Agreement, Chipotle would be joining the CIW's Fair Food Program, the only social accountability program of its kind that combines worker-to-worker education, a complaint mechanism with protection against retaliation, and a third-party monitoring organization that investigates and resolves complaints as well as carries out regular field and farm office audits to measure compliance with the Fair Food Code of Conduct. 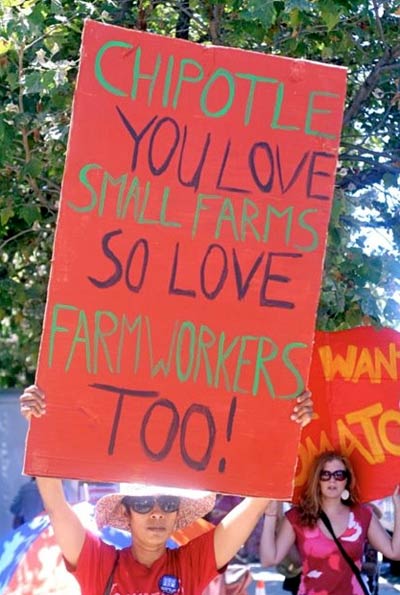 The entire Fair Food Program is enforced through the exercise of market consequences if a farm fails to comply with the Code. The market consequences are required by the Fair Food Agreements signed by participating retail food corporations, in which the companies have agreed to curtail purchases from growers unwilling to comply with the Code. Chipotle's refusal to sign an Agreement means it is under no obligation, much less verifiable obligation, to stop buying tomatoes from growers where workers' rights are being violated.

So, on September 15th, the CIW and allies will head to the Cultivate Festival in Chicago to show Chipotle that promoting itself as sustainable is not enough - it must include workers' rights, and workers themselves, in its vision of a food system that claims to be based on integrity.

Fair Food activists are planning a series of creative actions inside the festival - creating a festival within a festival of sorts - to unveil the truth behind Chipotle's marketing. Combining prayer, theater, music, and a few surprises, the counter-festival will highlight the contradiction between the attention Chipotle pays to sustainable meat and animal welfare, on the one hand, while, on the other hand, simultaneously refusing to partner with the CIW in the Fair Food Program, the program for real social responsibility that is today changing the pervasive poverty and powerlessness of the farmworkers who pick Florida tomatoes.
If you live in the Chicago or Denver areas and would like to get involved in the Fair Food activities during the upcoming Cultivate festivals, you can email organizers at Interfaith Action of Southwest Florida.
Posted by DFF at 10:30 AM