Our allies in Ohio were recently protesting outside of the annual shareholder meeting of the Kroger Corporation, the parent company of Colorado's own King Soopers and City Market.  Here a report from the CIW website: 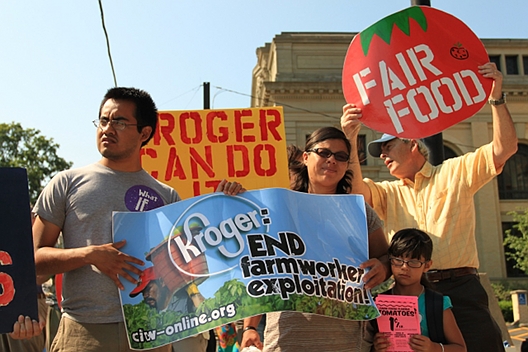 Late last month in Cincinnati, Kroger executives and shareholders gathered in the company's hometown for the 2012 Kroger shareholder meeting amid a tide of rising profits for the country's second largest grocery chain.

A group of over 75 consumers and farmworker allies -- including members of Ohio Fair Food, the Cincinnati Interfaith Workers Center (CIWC) and other organizations and congregations -- braved the sweltering June heat for a lively picket drawing attention to Kroger's ongoing refusal to join the Fair Food Program.

Click here for a photo report from the action!

Outside the meeting, picketers engaged board members and shareholders in dialogue on the changes underway in Florida's fields -- and Kroger's refusal to support these changes. The Fair Food activists also stood in support of a shareholder resolution filed by The Sisters of St. Francis of Philadelphia. Meanwhile, inside the meeting, one CIW ally posed the following question to Kroger CEO David Dillon, which read, in part:

In a rehash of comments made at last year's shareholder meeting and again just days ago, Dillon offered a non-response referring to unilateral "investigations" and the company's own code of conduct -- the same code of conduct in place while Kroger continued to purchase, and profit from, produce harvested for decades under conditions of poverty, degradation, and abuse. 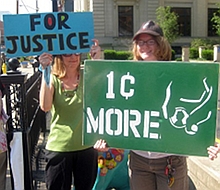 The response from Dillon and Kroger is especially jarring given the successful implementation of the Fair Food Program on fields across the state this past season and recent reports that the rising profits lauded at the shareholder meeting are attributable, in part, to "falling costs for produce" and Kroger's penchant "for holding down prices, even as food costs rise."

Undaunted, protestors outside the meeting continued with a march to Kroger corporate headquarters before concluding the action at the Cincinnati Interfaith Workers Center:
And finally, don't miss the media coverage of the day's events:
Posted by DFF at 11:39 AM