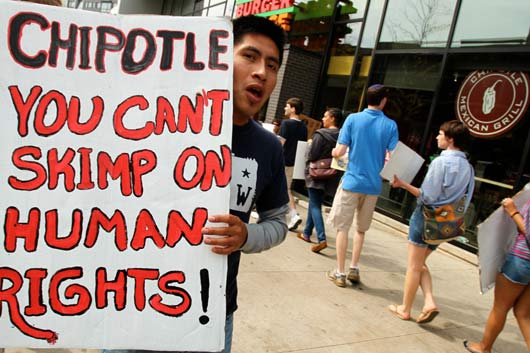 The great folks at SumOfUs.com have started a petition demanding that Chipotle stop the PR games and half measures when it comes to farmworkers human rights and finally sign a Fair Food agreement with the Coalition of Immokalee Workers.

And be sure to see the CIW's extensive rebutal to Chipotle's Top Ten Falsehoods, Fibs and Fabrications about the Campaign for Fair Food (currently on #6).

That’s how the US attorney described working conditions on one Florida tomato farm in 2008. Farm labor bosses have repeatedly been brought to court for their treatment of workers, including in that case for beating their workers who refused to work or tried to leave, holding their workers in debt, and chaining and locking workers inside U-Haul trucks as punishment.

Luckily, when it comes to Florida tomatoes, there’s a solution: The Fair Food Program, created by an amazing group of Florida farmworkers called the Coalition of Immokalee Workers, who’ve already successfully convinced major corporations like Burger King and Subway to participate in their program.

But Chipotle is refusing to join the program – despite all its marketing hype about ethical sourcing. That means that the tomatoes in the salsa and burritos we buy at Chipotle could be being picked under these horrific conditions.

Send a message to Chipotle’s CEO Steve Ells, calling for him to commit to real “food with integrity” by signing the Fair Food Agreement.

And it actually gets worse. Chipotle is misleading its customers by trumpeting the work of the CIW on its website. In reality, Chipotle broke off talks with the CIW, opting instead to go it alone — no partnership, no verification, no commitment for the long term. By refusing to partner with the CIW, Chipotle is undercutting the life-changing work the CIW has done to protect farmworkers from the often-brutal conditions workers face at farms not participating in the Fair Food Program.

Since organizing in the mid-90s, the Coalition of Immokalee Workers has successfully pressured large corporations like Aramak, Compass Group, and Whole Foods to sign its Fair Food Agreement, guaranteeing a fair wage and worker protections to the men and women who pick tomatoes across Florida. And just this past February, SumOfUs.org members helped convince Trader Joe’s to sign the Fair Food Agreement!

Join the movement for fair food by sending a message to Chipotle’s CEO, urging him to sign the Fair Food Agreement now.