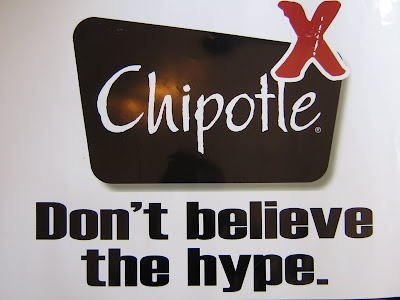 Judging by the responses of marketing industry insiders, Chipotle pulled off an amazing advertising coup during the television broadcast of the Grammy's last week. With a 2-minute commercial featuring a song performed by Willie Nelson and a stop motion animation about a farmers journey from destructive industrial agricultural practices back to more sustainable methods, it stole the show from the music awards, deeply moved many people, generated a ton of publicity and brand recognition, and reinforced its image as a company committed to "Food With Integrity."

But while Chipotle's stunt may be good marketing - maybe even good music and good filmmaking - it does not mean Chipotle's behavior in the real world matches the image it's "cultivated" for itself.

A couple of writers looked beyond the hype and explored the hyprocrisy (or as we like to call it Chipocrisy) of Chipotle claiming to support a better, more sustainable food system while stubbornly refusing to collaborate with the Coalition of Immokalee Workers to improve the wages and uphold the human rights of farmworkers in its own supply chain.

Be sure to read these two great article:

Chipotle's Grammy Ad: Great Farming Practices, or Just Great Filmmaking?
Paige Smith Orloff from OnEarth dissects the history of Chipotle's resistance to the Campaign for Fair Food and explains why Chipotle's claims to already be addressing the problem of farmworker exploitation fall far short of a real solution.

Chipotle Ad Criticizes Industrial Agriculture but Ignores Worker Rights
Sarah Damian from the Food Integrity Campaign (not to be confused with Chipotle's marketing slogan "Food With Integrity) articulates how Chipotle's refusal to collaborate with the CIW contradicts it's supposed goal of food integrity by denying a voice to the people - farmworkers - best positioned to ensure real transparency in the food supply.

We'll end with Sarah Damian's words:"So while Chipotle's commercial makes a powerful statement about the current state of U.S. agriculture, a major component is still missing. Chipotle's outright rejection of worker rights in its "food with integrity" mantra makes you wonder if the restaurant chain is serious about making concrete changes in our food system or if it's simply just PR."

And these from Paige Orloff: "Here's an idea: maybe its next film could expose the plight of farm workers and announce the company's adoption of the Fair Food pledge. Now that's an idea that would definitely bring tears to my eyes."
Posted by DFF at 12:01 PM