Last Friday, Chipotle Mexican Grill founder and CEO Steve Ells gave the commencement speech at the University of Colorado in Boulder. He repeated his well-worn mantra of "food with integrity" but, unfortunately for him, not everyone was swallowing it.

Many students (and community members) were outraged at Ells' selection as the keynote speaker for graduation. While Ells claims to be "revolutionizing the way America grows, gathers, serves and eats its food," he still refuses to work with farmworkers - that is the very people who grow and gather our food! - to further the progress they are making in revolutionizing labor relations within the agricultural industry. This inconsistency between Chipotle's words and actions when it comes to the rights of farmworkers has been going on for so long that we have a name for it: Chipocrisy.

Outside the stadium where graduation occured, we shared the truth about Steve Ells' Chipocrisy, distributing hundreds of fliers.

During his speech, we shared our own message with Ells: STOP BEING A CHIPOCRITE! SIGN ON WITH THE C.I.W. ...

ISN'T THAT FOOD WITH INTEGRITY? Mr. Ells did not respond.

Police forced us to take down our banners claiming we were violating a CU regulation which they were unable or unwilling to cite. 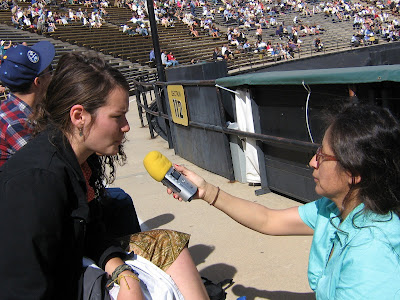 Afterwards, several reporters including from KGNU and the Daily Camera interviewed us. 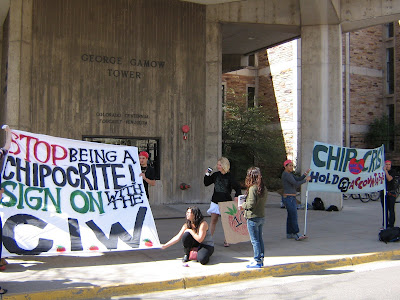 After the ceremony, we continued to get the word out . . . 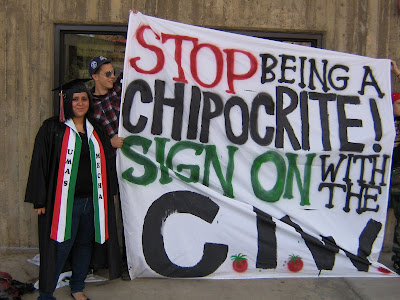 . . . were joined by a few long-time allies/new graduates like our friend Jessica from MEChA de Boulder . . .

. . . and spoke with hundreds of curious consumers. While Steve Ells may be a judge on NBC reality shows and the commencement speaker at his alma mater, we can stand firm knowing the truth is on our side.
Posted by DFF at 10:57 AM