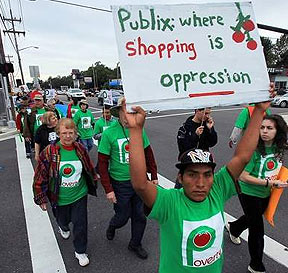 Already plans are underway for folks from Denver to participate in this important and exciting action. It will be a great opportunity for the Denver community to strengthen our connections with the workers in Immokalee and our commitment to the struggle for Fair Food. If you're interested in attending, contact us at DenverFairFood@gmail.com.

Join us this spring for an intensive campaign of education and action to end modern-day slavery in Florida's fields.

Farmworker Freedom March
* Three-day march of farmworkers and allies
* April 16-18, from Tampa to Lakeland (home of Publix)
* Route details and logistics to be announced soon

The fight to end modern-day slavery has been gaining important ground in recent months. Ten months ago, Florida Governor Charlie Crist wrote these words in an open letter to the CIW, after the Governor and his representatives met in Tallahassee with CIW members and victims of modern-day slavery cases:

"I have no tolerance for slavery in any form, and I am committed to eliminating this injustice anywhere in Florida. I unconditionally support the humane and civilized treatment of all employees, including those who work in the Florida agricultural industry. Any type of abuse in the workplace is unacceptable.

I support the Coalition's Campaign for Fair Food, whereby corporate purchasers of tomatoes have agreed to contribute monies for the benefit of the tomato field workers. I commend these purchasers for their participation..."

“They are our eyes and ears out here,” Frost said. “They’re the ones that will be able to alert us to these trafficking type of situations. It’s important that they know they have rights as victims.”

"The United States was founded on the principle that all people are born with an unalienable right to freedom -- an ideal that has driven the engine of American progress throughout our history. As a Nation, we have known moments of great darkness and greater light; and dim years of chattel slavery illuminated and brought to an end by President Lincoln's actions and a painful Civil War. Yet even today, the darkness and inhumanity of enslavement exists. Millions of people worldwide are held in compelled service, as well as thousands within the United States. During National Slavery and Human Trafficking Prevention Month, we acknowledge that forms of slavery still exist in the modern era, and we recommit ourselves to stopping the human traffickers who ply this horrific trade...

... The victims of modern slavery have many faces. They are men and women, adults and children. Yet, all are denied basic human dignity and freedom. Victims can be abused in their own countries, or find themselves far from home and vulnerable. Whether they are trapped in forced sexual or labor exploitation, human trafficking victims cannot walk away, but are held in service through force, threats, and fear. All too often suffering from horrible physical and sexual abuse, it is hard for them to imagine that there might be a place of refuge...

You can read the proclamation in its entirety here. Its words reflect the fierce urgency of the fight to end this most violent form of exploitation. 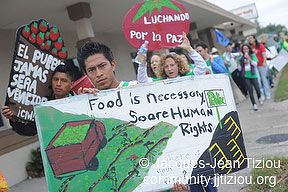 The movement to end modern-day slavery is not an issue of partisan politics, and it's definitely not a labor dispute. It is a movement to defend one of our most fundamental human rights, and the CIW has been at the forefront of that movement for many years.

Yet when we asked Publix to adopt the principles of the Campaign for Fair Food -- principles, including a zero tolerance policy for slavery, designed to eliminate forced labor and its causes -- Florida's largest supermarket chain turned its back.

Instead, Publix continued to purchase tomatoes from the very farms tainted by the latest slavery prosecution. When asked why, Publix spokesperson Dwaine Stevens told the St. Augustine Record:

"... the chain does purchase tomatoes from the two farms but pays a fair market price." ("Farmworkers protest supermarket tomatoes," 11/24/09)

But there is no "fair market price" for slavery, and there will be no end to modern-day slavery until companies like Publix stop turning a blind eye to human rights abuses in their suppliers' fields.

Help us send a message that Publix cannot ignore. Join us this spring for the Farmworker Freedom March, for a march you -- and Publix -- will never forget.

Check the CIW website http://www.ciw-online.org/ more information on all the action this spring!
Posted by DFF at 11:40 AM